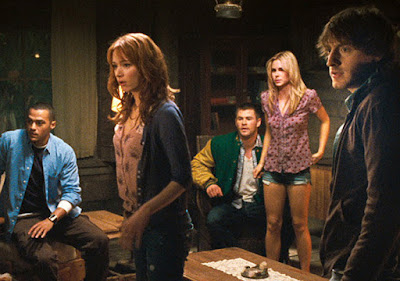 The Cabin in the Woods (2011) is a meta-analysis of the entire horror genre. It's funny, self-aware, and gruesome. Lots of spoilers ahead as per usual, but this time, if you haven't seen the movie (and you should if you like meta-horror or Joss Whedon) DON'T read on. This movie is best viewed without spoilers.

I was really really super-psyched about this movie when it came out because it is a horror written by Joss Whedon. I knew he would subvert the genre and flip it on its head. He did and this is a really great horror film, but it also disappointed me this time around...just a bit.

We have the traditional horror formula here. Hot dude and hot chick are in a relationship, stoner dude, smart dude, and "virgin" girl protagonist. The film has interesting ways of letting you know that these are out-dated archetypes and if these are the rules, perhaps it's time to break the rules and start over. Buuuuut, they still employ these outdated stereotypes of horror. We still see gross displays of the over-sexed blonde, including her topless. That disappointed me. It's not like you HAVE to have it. They could have shown the reaction to it without showing it, if they wanted to make the point that it's part of the process.

I do like that the movie ultimately threw the gauntlet of horror at you and then blew it up. Like see, we can be done with this formula now, ok? But again, it used the formula to make the movie that thinks the formula should be blown up, sooooo....

I don't know what to think. The meta of horror was done better in "Scream" without showing boobs. The music is pretty good in this film, but the score wasn't even noticeable. Joss has terrible taste in music for the most part though, so that wasn't a surprise. All three of the boy-protagonists are hot, so that's a bonus you don't normally get in horror.

I enjoy that the take-away is supposed to be a big reset button on horror as we know it, but I didn't enjoy it as much this time around as I did the first couple of times watching it.

I would have liked seeing the personalities of the characters a bit more before they were brainwashed. I would have liked this movie a LOT more if they had simply treated the "over-sexed blonde" character with a little more respect. They didn't have to be so overt. We know this character already. Don't hit us over the head with it. AND it was Joss! The film would have benefited from his patented flip-the-gender technique here. We could have seen Hemsworth's character being the oversexed one. Wouldn't that have been nice? He could have been the "whore" archetype! Damn it, why didn't they do that?

Other random notes:
*Joss. Why you gotta always have a big fuck-off snake?
*Sigourney!!! How perfect was that moment when she showed up? No. One. Else. Could have been that character.

If you're a horror aficionado, this movie should be up your alley, because it makes fun of everything you love while still DOING the thing you love. If you want to be genuinely freaked out by your horror, this probably isn't for you. Other than that, pretty great horror film.