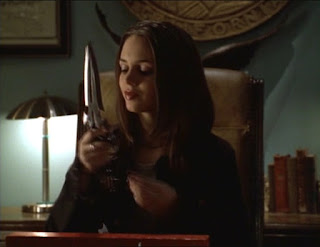 Off the top of my head, I can't remember which episode this is, but I have always really enjoyed the concept of choice. It was one of the main themes that drew me to the mythology of "The Matrix" and I really enjoy when pop culture symbolism harkens back to the reality that everything we do in life is our choice. No one is forcing your hand. You do as you wish and the consequences/rewards follow, NOT the other way around. There's nothing more intolerable than people who think life happens TO them. If you are a person that tends to blame fate or thank God, give YOURSELF a little credit once in awhile.

Now, let's begin. The Mayor is giving Faith a beautiful knife in the opening scene. Buffy and Angel are killing vampires and wondering if they're in a "rut" in their relationship. Credits.

Buffy thinks that she can't go to college 'cause of being the Slayer. Faith is reaping the rewards of her choice to align herself with the Mayor with her new knife and the doting he places upon her. Xander is choosing to forego school to get "On the Road" like Kerouac. Cordelia is being mean as per usual. Buffy has decided to stop waiting for the Mayor to make his move and go on the offensive. Faith kills another human (I think he was human).

Willow is wearing a velvety witchy dress. Xander sees Cordelia working in a boutique which is a big deal because Cordelia shouldn't have to work because her daddy is rich. Intrigue?

Angel and Buffy are nice in a rut. They work well together fightin' evil...like a choreographed dance. Oh no, Faith has Willow captive. Everyone is fighting over the choice to trade back the thing the Mayor wants for Willow or, as Wesley wants, NOT trade and possibly sacrifice Willow. Everyone is yelling and arguing and Oz walks up and throws a pot, shattering it against a wall. He has made his point.

Willow kills a vampire by levitating and then staking him with a pencil. Cool. She then escapes and finds the Books of Ascension. Faith finds her and Willow gives her a rousing speech about how she could have made a better choice. She was also a little TOO insulting, but hey that's the innate meanness of Willow.

When they all meet up with the Mayor makes a rousing speech about how Buffy and Angel are doomed. He, like Spike did earlier this season, says a lot of very insightful things. Like how dismal their future will be. "You're immortal, she's not." Just as they're making the trade, Snyder shows up and ruins everything, opening the box and unleashing the contents; ew, a huge spider. Turns out there are 50 billion in the box and the Mayor has to eat them all. Ew.

Willow has chosen to stay in Sunnydale to go to school.
Posted by Mixtress Rae at 6:18 PM