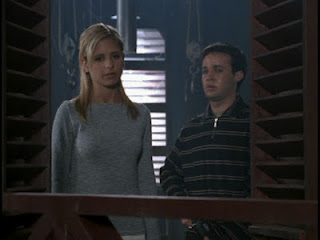 Buffy's fighting demons without mouths. Some of their blood seeps into her skin. This is the episode they had to delay significantly because of the Columbine shootings...'cause Jonathan freaks out and almost shoots himself at the school. Uh, spoiler alert.

Giles finds out the demon can "infect" the host with an "aspect of the demon" so of course Buffy is freaking out she's going to grow a tail or something because her hand is all itchy. I know I've said it before, but what makes Oz so hot is not in small part the black fingernails. Black fingernails just do it for me.

Buffy is all paranoid also about Angel's involvement with Faith in the last episode. Blegh, I'll be glad when Angel is gone simply because I don't like him and Buffy together.

Suddenly, the aspect of the demon shows up...gasp! Buffy can read minds. She's enjoying it at first. Maybe I should read Othello. Buffy goes over to see Angel and starts talking about Faith to see what Angel secretly thinks about her, but of course she can't read a vampire's thoughts. "The thoughts are there, but they create no reflection in you."

Sometimes as I'm trying to have deep thoughts about the episodes as I'm writing these blogs and all I can think about is trivial things like how pretty Buffy's eyes are or how witty Oz's quips. I suppose it's not always insightful to do these freewriting Buffy blogs, but I have to forgive myself for not always being insightful. I'm doing this for writing practice. I'm doing it to be more aware of my culture consumption. Sometimes it's really awesome and I have 'a-ha" moments.

I love that Cordelia says out loud exactly what she thinks.

Oz thinks: I am my thoughts. If they exist in her, then Buffy contains everything that is me and she becomes me. I cease to exist.

In the cafeteria Buffy is overwhelmed by thoughts of others' insecurities. Everyone is worrying about something: grades, if people like them, etc. She hears the thought, "This time tomorrow, I'll kill you all." She tries touching everyone around her to focus on their thoughts, but she passes out. She goes home to rest and overhears Joyce thinking about having sex with Giles. He he.

Angel is trying to find the demon of course, 'cause he's all manly like that. He gets her the antidote of the demon's blood? That's what infected her in the first place! Whatever. And Jonathan is in the clock tower with a rifle.

Cordelia finds a letter for the newspaper editor that sounds like a confession from Jonathan. It's a few minutes before lunch so everyone splits up to search for Jonathan. Buffy finds him in the clock tower and dramatically somersaults herself up to the top breaking in through a window.

I really like the insight Buffy has in this scene. Jonathan says everyone thinks he's an idiot and Buffy tells him she doesn't think about him much at all, that no one thinks about anyone else because they're all too busy worrying about their own shit to notice someone else. It's so true, man! I always think that when someone is being really fatalistic and self-centered worrying about what other people think. People don't think. Not about others. We're all selfish beings and that's ok. It's not bad to be selfish. We all have to be self-sufficient so of course we're only worried about ourselves. It's survival. No one cares what you do unless you're invading someone else's privacy.

Buffy speech: My life happens to, on occasion, suck beyond the telling of it. Sometimes more than I can handle. And it's not just mine. Every single person down there is ignoring your pain because they're too busy with their own. The beautiful ones, the popular ones, the guys that pick on you, everyone. If you could hear what they were feeling: the loneliness, the confusion. It looks quiet down there. It's not...it's deafening.

So good! The Slayer has gained some serious empathy through this experience. After her big speech Jonathan gives her the rifle and she says something about "mass murder" and he tells her he'd never hurt anyone, he was going to kill himself. Meanwhile, Xander has snuck into the kitchen to get some jello and sees the lunch lady putting rat poison in a big pot. Earlier in the episode he mentioned that it was probably her. Xander is again going to save the day.

Commentary (by Jane Espenson) notes added 5.19.13: Buffy wishes she knew what Angel was thinking and in this episode she takes on an aspect of a demon that allows her to hear the thoughts of everyone. Jane makes a comment about how Buffy at first thinks it's cool, "all these rooms I can walk into" and then later she hates it: "all these people can walk into my head". A "be careful what you wish for" episode like "Band Candy" when Buffy wishes Giles and her mom would stop being so parental for a bit.

I think that if someone could really hear what you were thinking, it wouldn't come out in words like it does in pop culture. You'd feel what they felt maybe, or perspective would change in some weird way, but would you really HEAR thoughts like the words of the other person in your head? That seems unlikely to me.

Not a very interesting commentary. Mostly Jane is just remembering writing it and telling us what's going on with the plot. I'm glad I have less than ten of these left. I'm ready to move on to the next thing, which I think will be watching special features in order (instead of reverse order, like I'm doing now). Then, finally, I will start the comics...catch up to now and then start on the special comics like Omnibus and side plot stuff.
Posted by Mixtress Rae at 6:27 PM