Buffy the Vampire Slayer: The Harsh Light of Day. 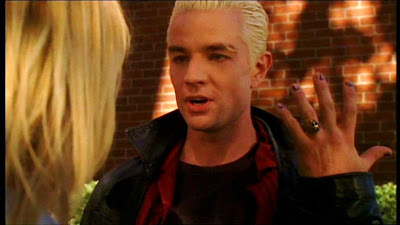 Parker is so charming. I would have fallen for him too...if he was my type. Anya barges into Giles' apartment. Her hair is so dark and pretty. She confesses to Xander that she can't stop thinking about him and asks where their relationship is going, etc. Spike! is Harmony's boyfriend. She calls him Blondie Bear. Harmony is so pretty.

Anya shows up at Xander's and takes her clothes off, thinking that if they do it she'll be able to stop thinking about him. Buffy keeps having to hide stuff from Parker 'cause of Spike and Harmony and stuff. 1999 was a great time for music and clothing. Buffy is wearing this cute top that has all these ties in the back. I'd love to feel confident in a shirt like that. Perhaps after my 7 days of raw food, I will.

Parker and Buffy totally do it...and so do Anya and Xander. They both have their second times on the same night. Buffy thinks it's the start of a relationship and it isn't, whilst Anya says she's over Xander, but it's actually the beginning of a relationship that lasts the rest of the series.

Spike has spent the episode looking for the Gem of Imara, which is a vampire myth holy-grail-thing that's supposed to make vampires invincible and impervious to sunlight, and they found it 33 minutes in.

Parker blows Buffy off, then Spike shows up in the sunlight and he and Buffy have a knock-down drag-out on campus with people everywhere.

Conclusion: Spike is a dweeb and Parker is a "poophead". Ah, I get it. The harsh light of day is dealing with the mistakes you made the night before AND vampires walking in the light.
Posted by Mixtress Rae at 10:10 PM