I was just looking through about 15 pages of Google images of Lady GaGa, nobigdeal, when I came across a picture of GaGa squatting down singing and there's a tiny indication of a tampon string emerging from her leotard thing and the writer of the blog where the picture was from was using words like "nasty" and saying sentences to the effect of "you should tuck those strings back before you show us your crotch, GaGa!" etc. I am outraged, and I'll tell you why:

1) when you're a performer of the magnitude of Lady GaGa, pictures are taken of you constantly. Girls, if you weren't paying attention in health class, spend 1/5 of our fucking LIVES bleeding out the crotch! There's gonna be a picture with a tampon string if you are a famous girl performer and you wear crotch-cutting leotards. Deal with it!

2) being a female and calling another female nasty for an accidental tamp-slip is terrible! You should be kicked out of the girlclub right now. How the hell can you fault someone for having a period and still daring to put on a kick-ass show?

How the hell can you point fingers at a woman who's doing what she wants and making a living being subversive and interesting? She is on her period and she's not compromising her regular crotch-baring-singing-crouch OR her outfit. She's, like women on the Tampax commercials, swimming and biking and wearing white pants. We should show this picture in our blogs with applause...not criticism! You go girl, having your period and still rawking the leotard and letting it all hang out.

I'm not gonna post it because GaGa is a very intentional performer, but this shot wasn't. Also, it could have been photoshopped, which is even worse that someone would fabricate this just to make fun of someone. That's gross. Way grosser than tampons!
Posted by Mixtress Rae at 11:02 PM 2 comments: 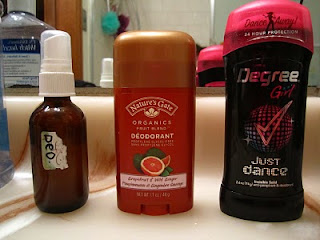 Man, I can't tell you how happy I was to come home from a stinky day of work to apply my trusty Just Dance deo. Gonna have to go with chemicals on this one, but at least I know I can cut back.
Posted by Mixtress Rae at 10:49 PM 1 comment: