a day of joy and mourning. 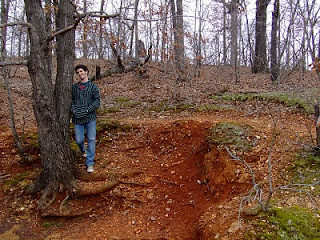 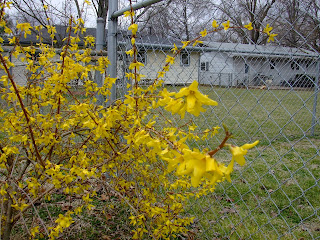 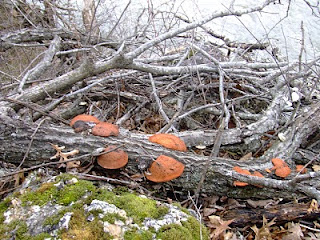 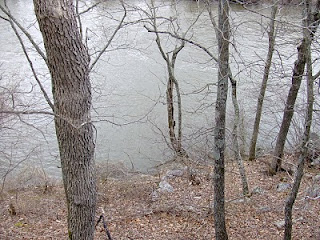 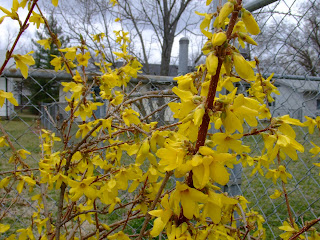 Joyous living-every-second-of-our-last-day-of-spring-break and mourning the soon-to-be-loss-of-same. Michael and I hung out with my gparents (that's her forsythia in shots 2 and 5), went to Wildcat (shots 1, 3 and 4), wandered around Target and other shopping establishments (not pictured), had pizza and beer (also not pictured), and watched the third Resident Evil movie (not as good the second time). I've done some tidying and a MASSIVE dishes EXCURSION and will probably veg out on some "Mighty Boosh" later. Terrific BBC tv show, btw. Check it out if you're into superweird British comedy. Back to the grind tomorrow.
Oh, and Michael and I totally decided that we're going to Arizona this summer. Eff the costs. We're doin' it!!!

I started officially working on my zine on Friday afternoon after being inspired by Lady GaGa's new video, "Telephone". It looks pretty rough (lots of typos and I sort of just freestyled it, so it really could have been better), but since it's my first piece, I'm keepin' it as is. In fact, I may be doing the entire thing with my typewriter and I REFUSE to be obsessive about it. I just want to get this first issue out there. I've been doing really silly pieces. I'm putting some of my highschool poetry in there, a dorky collage I did in Beginning Drawing a few semesters ago, a hot chick from a '70s Playboy, just totally random stuff. I suppose it will be more of a fanzine than anything else.

Regular Features I'm considering include, but are DEFINITELY not limited to:

*Ask the Psychology Undergrad: like an advice column, but it will be very tongue-in-cheek.
*Psychology Term/Definition of the Ish-this will be me (or I'm hoping I can get other psych students and professors to contribute here as well) nerding out on psychology.
*Mixtape of the Ish-this will be an old one from my big mixtape box and it can be either one I've done or one from someone else.
*Mix CD of the Ish-and I am planning to have the first 10-20, depending on my budget for each particular issue, include the featured mix.
*Retro Stereo Ad-I've got tons of pictures of beautiful electronics.
*I'd like to have some reviews as well...of ANYthing pop culture-related.
*I'm toying with the idea of having a Buffy ep of the Ish too, which I will get a fair amount of crap for, but who cares? It's my zine!

Anyway, in the first issue I'm doing a "Meet the Family" segment that will have a pic and introduce each of my live-in family members (Luna, Michael, Xenon, Alfonzo, Tundra, and Pele). I also plan on (probably in future issues) doing a "Meet the Extended Family" segment that will include mom, gma, papa, Sagan, Cara, my aunt Mimi and Uncle Don. I also plan to have a "meet the electronics in my life" segment, or just introduce them periodically. First ish, I will introduce Forsythia, my typewriter.

Oh, and I want contributors!! Any talents anyone has, I want them in my zine!

Anyway, I posted an "event" for the release of the first issue on FB and I got a tremendous response. 14 people have already requested a copy and I have other peeps that I will just give a copy to anyway, whether they want it or not, so even though the first issue will be pretty raw and unedited, people will be reading it, and if I can make it even semi-interesting (and promote the crap out of myself of course) I might really have a thing going here. Wow. I'm pumped!

I suppose this is what I'll be doing Spring Break. ;)
Posted by Mixtress Rae at 4:36 PM 1 comment:

Blister in the Sun // Violent Femmes

First of all, can you believe that their self-titled album PREdates the entire grunge era? It came out in 1983!!!

Ok, so listening to my DiscoStick, all the tracks in alphabetical order, has endeth. So, I am taking a little break from music listening projects by listening to playlists or whatever else I want for a few days. The next project is, ALBUMS! I've already reloaded my entire

The Safety Dance // Men Without Hats

(btw, right now I'm listening to all songs from 1983 in honor of my intended's birthday today!!) ipod (which consisted of deleting EVERYTHING from my ipod--anyone who knows me knows this was very difficult to push that button) with entire albums that I want to listen to all the way through. 8GBs of albums!! I will listen to them in alphabetical order by album. This is fun! Yes, I'm weird.