I filmed myself speaking in a soft voice in close proximity to my personal stereo collection. I then edited it and put it on the internet. Watch it!
Posted by Mixtress Rae at 10:20 PM No comments:

Below, you may view that other thing that you do where you decide your favorite music things of the year. 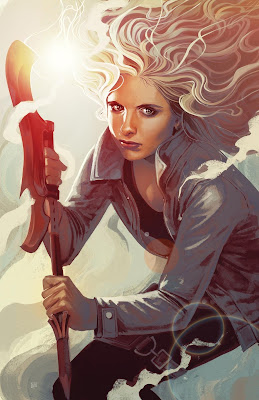 As y'all know, we are on a small hiatus from my usual format of talking about each episode of Buffy the Vampire Slayer exactly 20 years after its original airdate. We will be back to talk about "Gingerbread" on January 12th.

As I was reading the season 12 graphic novel this morning, I realized it was the end. The end end. Wha??? I had no idea Dark Horse was dropping the series and that this one little eensy weensy graphic novel was not only the entirety of season 12, but the end of the canonical comics! So, I decided to talk about my initial reactions to the end of the comic series and also the series as a whole, as I remember it. I have been reading them since they started back in 2007. And also some New Years Resolutions, because I always have them. What about you guys? Do you do the resolu?

Posted by Mixtress Rae at 5:09 PM No comments:

What's This Bitch Talking About? Amends

Angel: Am I a thing worth saving? Am I a righteous man?
Me: (stakes him with Giles' crossbow and walks away in the magnificent snow)

I hate Angel. SO. MUCH. in this episode. So much that this is the third (and probably final?) episode of Buffy that I will be placing in the Vault forever alongside "Ted" and "The Pack". Good riddance, "Amends". Never loved ya!

Posted by Mixtress Rae at 6:22 PM No comments:

My legendary (leg and dairy?) Xmas mix is playing on Friday night's radio show. Feel free to follow it on Spotify if you like it, childrens.

Also, I need your help for next week's radio show. I'm taking submissions for your favorite music of 2018 (either discovered or released in 2018). Please email me your selections to be a guest DJ on Mixtress Radio on the Solstice!!

Posted by Mixtress Rae at 1:11 AM No comments:

What's This Bitch Talking About? The Wish

Posted by Mixtress Rae at 11:32 PM No comments: