We found out yesterday that Cara's new spawn is going to be a girl. I am actually really excited to have a niece. I am very vocal about not wanting kids of my own, so I am happy to get to be a part of a young woman's life. That sounds so gay, but it's true.

I wasn't there for my sis when she had her first (Gavin). I didn't approve of her having a child so young and I was in my rebellious phase and just wasn't very supportive, so this is my chance to make up for it.

I plan to instill upon this little chicky some serious feminist ideals. I want to make her mixes and have her contribute to my zine and buy her her first pair of combat boots.

I hope she's a little weirdo in her own way.
Posted by Mixtress Rae at 4:38 PM 2 comments:

I can't handle it when someone is a swarthy know-it-all when they don't have the grainy knowledge to back up their claims. Artificiality just bugs me. I'm not talkin' about artificial hair color or artificial boobs (which bug me aesthetically, but I believe a person has a right to alter themselves in whatever way they wish)--I'm talking about not having the salt to back up your swagger.

For example, today I went to Changing Hands (used bookstore on 6th & Virginia) and bought an old beat-up paperback copy of Anne Rice's The Vampire Lestat. This is a guilty pleasure book for me and I had the huge imposing hardback version of it checked out from the library and reading it was distracting me. Anne Rice writes some compelling vampire fiction, but it's fluff. I know it's fluff and I want the physical presence to be honest about its fluffiness. That five pound brick with the shiny gold lettering was too pretentious for the meat inside, so I had to buy the paperback. The cheesy '80s paperback with a generic picture of some gnarly tree branches with a house inexplicably in the background is infinitely more real because it represents what's inside. This is how I like my bad fiction--with a bad cover. Something wherein I can bend the spine backwards and spill coffee and shove hastily into my purse when someone I respect almost catches me reading it. Something that is cognizant of its own shamefulness and doesn't try to be big and important.

And I also hate it when pretty people who are not smart think they are. The pretty boy who thinks he's deep when he's daft and dull and self-involved. Ugh, that moment where you realize the package is not at all representative of the viscera within and it hits you like a slap in the face. Afterwards you no longer find them as pretty, and it's like a tiny death, because you always hope against all odds that the drop dead gorgeous ones have a brain...I hate that moment!

And I hate it when people proclaim things with factual certainty because they heard it from someone they know. Critical thinking, people!

I also can't stand it when people describe something that happened to them years ago with lurid detail, as if they really remember it that vividly.

And then there's pretentiousness. That's basically what that hardback Lestat book was trying to be, but also there's just plain human snobbery. Acceptance is way hotter than better-than-thouness, and please don't EVER talk in the third person. You are not that important. I could never be friends with a celebrity because how can you possibly stay "down-to-earth" when you're constantly having your ass kissed? I have a theory about famous people becoming evil that goes with this whole thing, but I'll save the blather for another blog or my zine or somethin'. A few of you have heard this rant already anyway...

Don't be a bad historian of your own life! Know what you know and what you don't know. Question everything! Be truthful. Ok, I'm sounding ridiculous and cliche-y now, so I'm going to stop.
Posted by Mixtress Rae at 10:20 PM 2 comments: 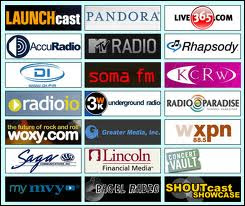 I just want to briefly express my deep appreciation for internet radio.

As a big fat hairy music nerd, my lifelong relationship with radio has been tense, to say the least. I listened to regular old-fashioned local radio nonstop in my preteen and elementary school years, settling for the R&B dance sounds of the early '90s. Actually, I quite liked it at the time, as I was young enough to appreciate SWV and En Vogue. Soon after, grunge hooked its tentacles into the radio waves and I liked Nirvana quite a bit, but I was ready for more eclectic sounds, so I stopped listening to the radio and started buying CDs based on the covers (This is how I discovered PJ Harvey and Ani DiFranco). This, as I'm sure you can imagine, was hit or miss. And I was lucky enough to have grandparents with enough money to buy me what I remember as being a CD a week, though it probably wasn't quite that much. Looking back on that, I was so spoiled, but I have cherished that music and without this tiny piece of their infinite generosity, I wouldn't have advanced in my music love at such a breakneck pace as was possible in the mid to late '90s, before...

Though its only been in the last few years that I have discovered gems such as Pandora and last.fm, they have made listening to radio great again. I haven't listened to local radio in years, except for those rare occasions that I decide to check out radio for a week in the car and decide, again, that it sucks. I'm sure I'd feel different about it if I lived in a big city, but I don't wanna live in a big city, so there!

Furthermore, ever since I got a smartphone I've REALLY taken advantage of not only the customizable radio stations like the aforementioned Pandora and last.fm but also many other radio station apps like Digitally Imported (all electronic radio stations like "Future Synthpop" and "Tribal House" and "Space Music" etc--I listen to this ALL THE TIME!), Slacker, and NPR Music. I also love music subscription services such as MOG and Rhapsody, wherein you pay a monthly fee to listen to pretty much anything you want to. This means, if I had a subscription to MOG, I could listen to music that I can't fit onto my phone or new stuff I don't know if I want yet, etc.

These online radio sources are MAGIC! I will never again want for new music to experience. I can listen to specific genres from user-defined radio stations or just click on a channel from DI (Digitally Imported). If I want to hear the new Shakira before I decide to buy it, I go to MOG (or I will once I start subscribing--I REALLY think I NEED it, so I will probably just sign up for it, like as soon as I finish posting this blog)...

So, to sum up, here are a few suggestions for online radio from me to you:

*di.fm (for electronic music lovers--there are 37 channels on this site and it's available as an app for smartphones too. It's free! They have this new station called "Chip Tunes" that I've been listening to all day and it's all video game-sounding electronic music. I love it!!)
*MOG.com (subscription service that's $10/mo but you can do a 2week free trial, also available as an app and you can get 320kbps with this one. Yum!)
*pandora.com (if you've never tried Pandora, you HAVE to--it utilizes the Music Genome Project [meaning that it adjusts to what you like/dislike by using specific identifiers for each song, etc] and it is fabulousness--it's free!)

So, if you've been disillusioned with music since high school and have the perception that all music sucks these days, you are wrong and there are countless avenues to explore stuff out there that you like. Don't be scared. Get out there and find stuff you like! The internet is a beautiful thing, folks.
Posted by Mixtress Rae at 4:15 PM No comments: