I Never Had to Take the Red Pill.

Or, When I Stop Babbling, Maybe I'll Have a Point.

Today I've been struggling with NOT making a purchase. I told myself I wouldn't buy any new electronics in the year 2014 and today I almost bought a Gameboy Advance SP. I was in full on internet-purchase-porn mode. I was following several auctions on ebay, I had gone to Vintage Stock to see if they had the color I wanted (pink...why it gotta be pink?). I did a cost analysis in my journal. I was about to pull the trigger. Fortunately, my phone needed to be charged and was all the way across the room. A break from the purchase-porn lead to the analog journal-writing. Writing was the breath I had to take away from an obsession that is, quite frankly, ridiculous. The device I want (below) fulfills my completest need to have ALL the Mario Kart gameplay capability. I was essentially almost willing to buy an entire device for the capacity to play ONE game (Mario Kart on the Gameboy Advance--a game I recently lost the ability to play when Michael gave me his 3DS and I put my regular DS on ebay). ONE game I only play every few months. Because I have this NEED to be able to play all Mario Kart games. 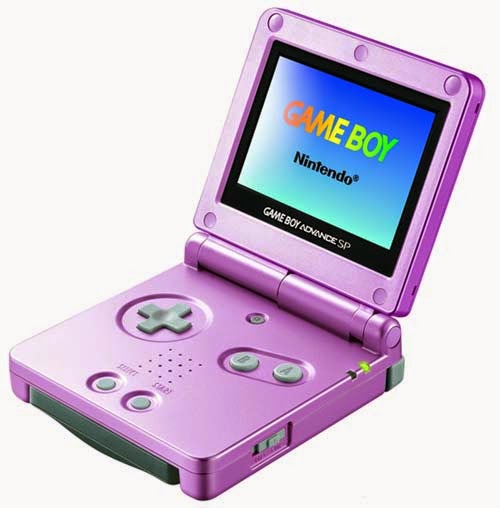 Even now, I look at the picture of this device and I'm swooning. I want to hold it and push the buttons.

I made it through the day...the kind of day I normally don't survive without that oh-so-(briefly)satisfying purchase click. My resistance of temptation is deeper than denying myself something I want. Grocery money is more important than electronic devices, and that is a factor, but it's deeper than that too.

Some years ago I alighted on a theory of placing my time in one of two categories: consumption versus creation. For a time I was vigilant about pushing myself to more moments of creation (writing, art, moving, etc) in my life. I've become quite lax this year. I've spent time away from my blog. I've not been reading. I've not been listening to new music. I've not been writing for "The Current, Etc". I've skipped two weeks of YouTube-posting.

I've reveled, even luxuriated, in much of the laying about listlessly, but as Tank Girl says, "It's been swell, but the swelling's gone down."

At the beginning of May, I had some mouth surgery (mucosele removal--look it up, if you've interest). At the time I assumed it would take a couple of days to heal and then that'd be it, but I spent nearly a month in pain, my mouth restricted. I couldn't smile. I couldn't laugh. Eating was difficult. Talking was difficult. A section of my bottom lip is STILL numb, over a month later! The circumstance of not being able to laugh and smile affected my mood significantly. I smile and laugh almost constantly in my life. It's a coping mechanism, but it's also a result of my awe at life.

Today I took a long walk at sunset and listened to a podcast interview with RuPaul. As obsessed as I am with Ru's show, I've never been a huge fan of RuPaul the entity. Glamour queens aren't really my bag. That said, this interview was very thought-provoking (WTF podcast with Marc Maron). Listening to Ru's life experiences and thought processes throughout, I realized that "glamazon" is simply Ru's most recent visual persona...it's the one that made her famous, but she's done New Wave, she's done Genderfuck, she's been punk rock...

At some point during her narrative, she spoke about wanting to "find her tribe". She remembers always seeing "the Matrix", society, as the construct that it is. It confused her that the majority of people were seemingly so into the "normal" thing.

This is something I have always struggled with. I have always questioned everything. I haven't been able to accept at face value what others seem to so naturally fall into. I've not often done what is expected of me, and in some ways this is attributed to simply being wired differently, but most of the time what others see as rebellion is simply me trying to pick apart why a thing is so often done in one carved-out way by so many people. I've mostly embraced my otherness, but a time in my '20s I really caved and tried to conform. Hearing Ru explain this concept as just not buying into "the Matrix" is so what I've been wanting to express for my entire life.

I don't have time to placate those that never bucked the system. I've been searching for my "tribe" throughout my life as well. Even in "alternative" cultures (goth, punk, piercers, etc) there is a way that you're expected to act. When I was training to be a piercer, I got a lecture from one of my superiors for self-mutilation, a phase that for me was never about self hatred, but testing limits and learning about myself. I was also told that I would have to get tattoos and a certain number of piercings to do the job. At the time I wasn't ready to commit to tattoos and I CERTAINLY wasn't going to get any piercings I didn't want. I was also told that choosing not to pierce someone's genitals wasn't an option. Going in, I expected the body modification culture to accept free-thinking. To be a piercer, I thought that meant I was going to learn to safely pierce people's bodies in exchange for money...but to the community at large, to be a piercer meant that I had to conform to a certain way of life. I found a lot of negativity and got out after performing one piercing (my mom's nose, still pierced today).

As an adult, I experience the audacity of people trying to tell me how to behave just as often as I did as a child. Just last night my aunt started a familiar diatribe with me about walking alone at night. It is presented as if I am taking my fucking life into my hands every time I'm alone in the world without a MAN to protect me! It infuriates me. The only way we subvert rape culture is by not tolerating it. I'm not going to sacrifice my freedom in exchange for "safety". I drive a car, though I know I could be fatally wounded at any moment.

I refuse to live my life in fear of men.

It's not my fault if someone rapes me, but it is my fault if I continually deny myself one of life's pleasures (walking/dancing at night outside) out of fear.

Another example of "the Matrix"/other people trying to control my body. I asked a local tattooist to put ink on my body a couple of years ago and he refused to do the tattoo because he felt it would look "like fucking shit". That part didn't bother me. What bothered me was his other assertion, that I could not get the tattoo in the orientation (words facing me on my forearm) I wanted, because that isn't how "it's done". You simply MUST get the words facing your hand, not your elbow. The next time he saw me, he grabbed my arm to "make sure" I hadn't gotten the tattoo from someone else; at the time I hadn't, as it was later that night. The fact that he was unwilling to perform the tattoo was his right as an artist and I am grateful that he didn't perform a tattoo he didn't feel comfortable with, but that he thought his opinions on MY choice of art warranted a demand to see that I hadn't "gotten the tattoo anyway" was what pissed me off. I eventually got the tattoo the way I wanted it and I'm very happy with it. It's my body, I'll do what I want with it. Fuck you if you're trying to control how someone else conducts themselves, if they're not hurting anyone.

"The Matrix" is all about control. Control, as long as someone isn't taking away the personal choices of others, should only be self-imposed.

All this blather is to say that I'm currently in this evolution of becoming the cunt I want to be, nay the cunt I always have been. I was born questioning and I will never stop picking apart the perceptions of myself and those around me. I'm interested in how you (yes, YOU) see the world, as long as you're not regurgitating the way someone else wants you to see it. I'm confrontational about my weirdness. I want to get in your face and make you question why you think the things that everyone has told you to think. I don't have an eloquent way of getting my point across. Sometimes I try to convince a random dude at a bar that I'm a drag queen in order to get him to question gender. I suppose in the end, he did. He questioned MY gender by grabbing my crotch and breasts while demanding to "see your junk". Why is a response to women so often taking ownership of their bodies and choices? I'm fucking done being NICE for a sake of keeping waters still. I've never fit in the box and while it may not seem that I've ever tried, I have. All these years you've seen me attempting to be "normal". Get ready for a new Mixtress. I'm embracing anger for the sake of living. Oh, and I'm still getting that "cunt" tattoo.

Posted by Mixtress Rae at 11:37 PM No comments:

Difficulties of the Mind.

I find I have so many. I find I self-sabotage what once was (and could be again) a creatively fantastic brain. I could blame it on adulthood. I never truly recovered from that moment when you suddenly realize the Barbie thing isn’t working the way it once did. I could blame it on an ex-boyfriend that destroyed my sketchbook of 5+ years, because in some ways I’ll never get over that 9-year-old injustice. That was an attack on my very being. I could blame it on art school degrading my sense of joy at making mistakes and happy little accidents and going with the flow. I could blame the tornado. That one’s pretty hard to argue...

But I’ve generally been one to take personal responsibility and I hardly ever place blame. Placing blame is lame. I'm learning not to fault myself, but I will take ownership of my creative output, which is sometimes so close to zero that the thought cripples me into further flatlines.

The only creative endeavors I’ve accomplished in the last month or so include making a few YouTube videos, putting on makeup and nail polish a couple of times, and hot gluing some flowers and ivy to three headbands.

In times of creative drought, I tend to fantasize about going back to basics. I feel like buying a Hello Kitty coloring book and coloring my feelings before I work back up to endeavors that might appear more adult-like. Maybe I'll do a paint-by-numbers. Perhaps I'll scribble in a few of my books with permanent markers.
Posted by Mixtress Rae at 7:19 PM No comments: