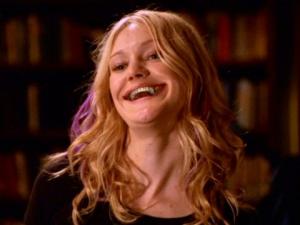 This is an important episode, so don't fuck it up, Stephanie.

Take us home, Angie Hart. Love this song. In fact, I think I need to post the lyrics, because it was made FOR this episode, so it's important and relevant to the storyline:

As the lyrics state, everyone is alone in this episode, and they (spoiler!) will talk to dead people. Buffy is in the cemetery. Willow is falling asleep at the school library. Dawn is at home alone.

Andrew and Jonathan are shown for the first time this season. They're coming back from Mexico. They're both having "from beneath you it devours" dreams, only Andrew translates it as "It eats you starting with your bottom."

Willow sees Cassie in the library, mentions Tara. Dawn is being terrorized by some weird spirit and can't turn the TV off, etc. Buffy is fighting a vamp that turns out to recognize her, but she doesn't recognize him. He majored in psych, so he psychoanalyzes B and it's really one of the better analyses of Buffy on the show. Dawn is hardcore being poltergeised or something. She hears her mother's voice on the radio and sees her mom a few times. Jonathan and Andrew arrive at the new school library. They are still hilarious, in case you were wondering. Andrew sees Warren. There's some sort of plan orchestrated by dead Warren. Andrew has to sacrifice Jonathan at the Hellmouth. Cassie tells Willow Tara couldn't come herself because of what Willow did. "You killed people. You can't see her. That's just how it is." It breaks my heart when Willow says "Tara". We see Spike meeting and later walking with a woman. Cassie tells Willow she can't use magic every again. Tells her she's going to kill everybody. Jonathan makes a sweet speech about how all the pain of high school has melted away with time. Dawn is doing a spell to cast out the poltergeist. Buffy admits Spike loved her but she didn't want to be loved. Psychoanalyst-vampire tells B she has a superiority complex and an inferiority complex about it. Dawn casts the demon out, then sees her mom. Cassie is trying to convince Willow to either give up magic completely or kill herself. This is when Willow realizes this isn't Cassie talking for Tara. We see Spike bite the chick he was on a walk with. Joyce tells Dawn Buffy won't choose her when "it's bad", then she disappears. When Buffy mentions Spike's name, psychoanalyst-vampire mentions that Spike is the name of the vampire that sired him.

Andrew stabs Jonathan. Cassie threatens Willow. Mentions "the whole balancing the scales, mortal-coil thing? I'm over it." That's the clue that it's the First. Jonathan's blood fills the Seal over the Hellmouth. Buffy slays. Spike kills the girl. Dawn is sitting in the middle of her destroyed house that looks a lot like mine looked after the damn tornado.

Commentary by Nick Marck, Jane Espenson, Drew Goddard, Danny Strong, and Tom Lenk- Joss wrote the segments with Buffy in the cemetery, Marti Noxon wrote Willow and Cassie's part, Jane Espenson wrote Dawn's horror part, and Drew Goddard wrote the scenes with Jonathan and Andrew. This is the only episode without Xander. Now THAT is an interesting tidbit. Cassie was originally supposed to be Tara, but Amber Benson wasn't available.

Both Cassie and Joyce were the First and they can be in more than one place at a time. That's what I assumed, but it's nice to confirm it. Jane here is talking about how Buffy is a very moral show. Everything character-driven, personal consequences, etc, but no conclusion on if there's a god or not ("eh, jury's still out"), leaving it up to the viewer to put in their own theology into the mix. Though I'd like a more Atheist stance myself, I get why they did this. Religious symbolism (crosses, cemeteries, hell and heaven dimensions) is powerful and interesting, even though I so KNOW there's no "God".
Posted by Mixtress Rae at 11:33 PM