Buffy the Vampire Slayer: Lies My Parents Told Me. 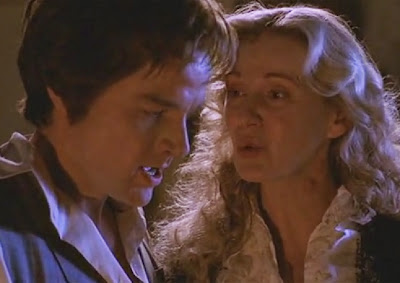 1977 is when Spike kills Wood's mommy. And Wood sees some of the fighting. In present time, Spike saves Wood. He wants to avenge his mom, anyway. Giles is ranting about the new library at the school: "Not a book in sight!" Giles and Buffy talk about Spike, his trigger, his chip, and his soul in front of Wood. Giles is going to put a bug in Spike's head so they can find out what the trigger of the trigger is. It takes him back to his past, reading his poetry to his mother.  She's sickly with tuberculosis. She begins singing to him. It's the jaunty tune that triggers him. He goes nuts, then the bug crawls out of his eye. Giles asks him about the song. He's reluctant to talk, but through flashbacks we see that after he was turned he wanted to turn his mom, but Dru was against it. Ok, another hole in the plot: In season 6 Spike mentions he had to crawl out of his grave, but his mom just revealed that she'd been worried about him being missing, presumably for the days it took for him to change. She would have thought him dead if he had been buried, yes? Since Dru turned him on purpose, wouldn't she have kept his body somewhere so that he didn't need to resurrect from a grave? Spike turns his mom. Willow gets a call from L.A. from Fred. She has to go away for a few days. Buffy unchains Spike against Giles' wishes.

Wood talks with Giles about the "problem" of Spike. Wood mentions the name of the Watcher that raised him and Giles puts it together that Spike killed his mom. Wood says Spike's "an instrument of evil" and wants Giles' help. Keeping Buffy at bay for a couple of hours while Wood kills Spike. I forgot Giles agrees to this. He takes B out for a training session in the cemetery. Wood is "looking after" Spike in the meantime. Takes him to his garage which is decorated with crosses. Wood pulls up the mp3 of Spike's trigger song on his computer and plays it because he wants to feel less guilty about killing Spike by killing the monster in the man.

Another Spike flashback. His mom is changed now and she is super mean to him and doesn't want to spend eternity with him. So the lie both Wood and Spike's mom told their sons was that they were important to them, but they were a lot less important than they needed to be. The lie Giles is telling Buffy is the deception of distracting her while Wood attempts to kill Spike. Giles intuits that Buffy would sacrifice Dawn to save the world, if faced with the same choice now. She agrees. Wood is actually doing some damage to Spike. Spike's mom tries to rape him, he kills her. Flashbacks endeth and he comes to, he's worked out the trigger after getting some closure on the whole killing-his-mom thing. He's gotten over it and is now fighting back with Wood. Spike is all Neo now. Just in case we were still worried about the trigger, Spike goes over and plays it from the computer again and he doesn't change. He tells Wood he's going to kill him and bites his neck.

Buffy realizes Giles is distracting her and she runs to Spike. He didn't kill Wood after all. Spike tells Buffy he gave him a pass and let him live because he killed his mother. Buffy goes to Wood's aid. He's pretty beat up. Buffy tells Wood she understands, but Spike is a warrior they need. Buffy threatens Wood that if he ever tries to kill Spike again, he'll kill him and B will let him. "The mission is what matters." which is the same thing his mom used to say to him.

Giles tries to explain to Buffy. Buffy says to Giles, "I think you've taught me everything I need to know." She shuts her bedroom door on him. Giles, why? Damnit, Giles.

Commentary by David Fury, Drew Goddard, James Marsters, and D.B. Woodside: I'm almost ten minutes into the commentary on this episode and haven't had anything to say yet. This scene wasn't really shot in New York, this shot was hard to do, bla bla. No new insights into the show itself. James isn't talking a lot, which is sad. It is kind of cool to know that the shot where the stone that drops from Spike's eye took 30 minutes, just to shoot a rock and get it in frame. If it were me doing that I'd be so impatient and think I was wasting my time, but art takes time, man. I love it. I read a quote today from Gloria Steinem...something like "writing is the only thing I do that I don't wish I was doing something else while I'm doing it." I'm paraphrasing, but that was essentially it. And I love that thought. When you're doing your thing, taking half an hour to get a two second shot of something is worth it. It's your fucking art. You take hours/days/weeks to paint a masterpiece if you're a painter and these things can be translating to any passion. Weeks to knit an afghan. A month to write the first draft of a novel. Etc etc. I love it. I want to do the art!

Ew. They picked the actress that played Spike's mom because she looked like an older Buffy and they named her "Anne" because that's B's middle name. Oedipal stuff. Ew.

Spike is an anomaly as a vampire. He's the only vampire on the entire show that retained a portion of his humanity as a vampire (without a soul). When Angel becomes Angelus, he doesn't retain any humanity and no other vampire really does either. They might have a semblance of their former personality, but no empathy, really.

The scene with Giles and Buffy in the cemetery was shot like ten days apart or something. They're not even in the same space at the same time. Weird. I notice the disconnect now that I know about it. I felt weird about that scene before, but I thought it was because I was mad at Giles for plotting to take out Spike.

Originally the scene with Giles and Buffy included Giles admitting that he killed Ben. That makes me feel better knowing that. It makes sense that he would choose that moment to tell her, when he's giving a speech about when to sacrifice and when not to sacrifice people for the greater good. Nice knowing a version like that exists, as Lloyd Dobler would say...

This episode is about killing your parents, both literally and figuratively. B has to shut out Giles after what he did. Spike actually literally kills his mother. Wood has to live on when his mother has been killed, and he has to move on without the kind of closure he thought he'd get. Spike has some closure too, beyond whatever closure he might have felt by killing his mother.
Posted by Mixtress Rae at 4:15 PM