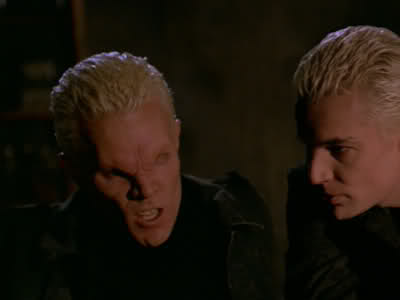 Buffy wakes Xander up at 4:30 in the morning looking for Spike. He's digging a grave, humming a jaunty tune.

London: a black robed figure is killing people from the Council. Willow arrives home to see Dawn amidst the wreckage of their house. Dawn tells her about her mom talking to her. Willow tells her not to trust what Joyce said to her. Xander and B talking about Spike when he gets back. I think they put Vaseline under Spike's eyes to make him look so sweet. B mentions Holden (psychoanalyst-vampire) and Spike doesn't bat an eye. Buffy convinces Xander to get Anya to watch Spike, not let him leave the house, in case he is killing again.

Buffy gets home and Willow explains what they went through the night before. "This big evil that keeps promising to devour us? Well, I think it's started chomping."

Anya starts snooping around while Spike is sleeping. He's naked. One thing about this show I'm not sure if I've mentioned: men are almost always the ones shown naked. Spike has been shown in a lot of almost-nudity, in a sexualized manner, several times. And Angel too. I believe most of the gender roles on this show are just straight reversed. Spike does look yummy laying there with a little side-flank showing. I'm really starting to think that it's not that women have less sexual desire, just that our sexuality is so fused with guilt and so NOT pandered to, at all, in our culture, that we just think we don't think about it. Having desire and not following through makes us teases. Not having desire makes us prude. But we're supposed to react sexually to a man just because he WANTS us. I'd rather see some effort, myself. A little side flank, perhaps? But not overly sexualized, like women. I'd like NO ONE to have to be overly sexualized, please. Nudity shown on Buffy is almost always male, sexy, but not flaunted in a trying-too-hard or vulnerable way. Male or female, confident, just-there nudity is a concept I can get behind!

So, Anya's snooping and Spike wakes up. She tells him she wants him, again. He rejects her and she's a little offended. After the sun goes down, Spike leaves and Anya let's B know. Spike hums a jaunty tune again and B is following him this time. Watches him flirt with a girl and take her off somewhere. There's a big crowd (some kind of festival?) so it takes a second to catch up to him. When she does, she taunts him, "You know you want it. You know I want you to." Then he bites the girl. Then he runs away guilty as B turns into Spike. You get that it's the First at this point, yes? Next scene the real B pushes Spike out of bed asking him if he killed the girl. Spike says he talked to the girl is all. Tells her he can barely live with what he did, says it haunts him. He says he talks to other women because he can't talk to her. Tells her he got the soul for her. That he passes the time, but it's still all about her.

B tells Spike that Holden told her he sired her. Spike is genuinely confused. B says he looked like he was on the prowl, not lonely. Asks him what happened. Spike is fuzzy on the details but he knows he wouldn't forget the taste of human blood.

The next night Spike starts to worry he did do it. Xander tries to stop him from going out, but he punches him. And it hurts, so the chip still works. Spike is asking around for a girl he remembers talking to at the Bronze. Aimee Mann is playing. He's in the balcony drinking out of a flask. A vampire comes up and starts hitting on him. She tells him he bit her. They start fighting. Spike stakes her and she falls over the balcony, dusting as she falls, interrupting Mann's "Pavlov's Bell". Everyone stares for a second, then the band goes on. Buffy is trying to find Spike. As the band is leaving, Mann says, "Man, I hate playing vampire towns." He he. Spike is on the payphone to B, telling her he's starting to remember doing bad things. Then he's faced with himself telling him he's going "against the plan". Spike shows B to the house where he's been burying the bodies. He's telling Buffy everything. As he's telling her everything he remembers, which isn't much, the fake Spike starts singing the jaunty tune. Sees him change. They fight. The buried resurrect as they're fighting, so B has to fight all of them. Suddenly Spike remembers everything and he freaks out, leaving B to fight the others alone. She kills 'em all real quick.

Spike is cowering in the corner. He offers her his chest. Buffy can't kill him. He asks her for help. She says she will. B isn't letting Spike out of her sight.

Giles finds the other Council members, something comes up from behind with an ax....credits.
Posted by Mixtress Rae at 12:40 AM