Buffy the Vampire Slayer: Get It Done. 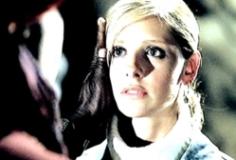 Buffy is checking on everyone sleeping. There are so many girls everywhere. The First Slayer pushes her down the stairs and tells her "It's not enough". Dream.

Spike and Anya are bonding about how crowded the house is getting, hanging out, on their way to the Bronze to get drunk together. Anya keeps making allusions to when they had sex, hinting that she'd like to again. Spike tells her to drop it.

There's pandemonium at the school. Things are percolating. Wood gives B a bag of Slayer stuff that used to belong to his mother. It was supposed to be passed down to the next Slayer when she was called, but he wasn't able to part with it until now. Wood wants to see where she works. B shows him her house. The Potentials are all training in the backyard. Kennedy is training them military-style. Wood is analyzing their form. Like HE gets to say if they're ready or not. Then he says "Show me the vampire." Why is she just following his orders? Ugh. I don't like him, in case you haven't noticed. Wood is mean to Spike, asking him a lot of pointed questions. Dawn went through the Slayer bag and updates B on the contents. Some books, weapons, and an "unopenable" box. They find Chloe (a Potential) has hanged herself. The First convinced her to off herself and makes threats to everyone in Chloe's visage. Buffy buries her and does a speech to everyone. "Chloe was an idiot, weak." Tells them they need to use the power they have. Spike tries to leave because he's "neither a girl nor waiting". Buffy confronts him too. She doesn't think anyone is using their full potential. Buffy tells Spike he was a better fighter when he didn't have a soul.

They break out the Slayer bag and invite Wood over as Buffy breaks open the box. Inside the box are some puppets that cast shadows on the wall. They tell the story of the origin of the Slayer. Earth, then demons, then men, then the men found a girl and made her fight the demons, by chaining her to the earth, then darkness. The thing starts spinning out of control, then there's a portal. B goes through it. A demon replaces her. Now without Buffy, everyone needs to use their full potential to fight this demon. Spike especially steps up to the plate. Lots of house destruction, as per usual. Willow needs to find a way to get Buffy back. Buffy is in the desert. Anya suggests they leave Buffy there, because of her "Everyone-sucks-but-me speech". Willow is worried about going off the deep-end if she does a spell as intense as opening a portal, but she knows she has to step up, too. They figure that they have to send the demon back in order to regain Buffy.

Spike is going after the demon, but he needs to get something first. Some tribal-dudes tell B she's the "hellmouth's last guardian". They tell her they can give her power and knock her out. Willow's starting the portal. Why don't they do this outside? Buffy wakes up chained to the earth. They tell her they brought her back to the beginning. She says she brought herself here and that she doesn't need any more power. They ignore her. They used the spirit of a demon, its essence, to essentially rape a girl and THAT'S how they created the Slayer. Men raping is how the almighty chick warrior was created. If that's how it's done, why aren't we all Slayers? The black energy is coming at her, to "become one" with her. They tell her this is how it HAS to be. She screams it out of her mouth, it goes for her other end.

Spike is putting on his leather jacket for the first time since before the soul. Willow is all black-eyed trying to open the portal. Xander thinks she should stop. She sucks all the energy out of Kennedy and Anya, then the portal opens. Xander pulls Willow out of the circle as her hair turns black...it turns back after she gets out of it. Spike is fighting the demon with his old gusto. Wood has seen him in the coat. Even though it looks like a normal leather trenchcoat, he recognizes it as his mother's.

Buffy's refuses to be "knocked up by some demon dust". She wishes to retain her humanity and fight the First on her own terms, not theirs. She frees herself, tells them they violated the girl that became the first Slayer, and fights them. Spike kills the demon and lights a match on his tusk. The lead tribal-dude accepts that Buffy is not going to take the power offered to her and shows her a vision. We don't see it at this time. Spike brings back the dead demon to the portal and B is transported back. Willow apologizes for taking Kennedy's power. Kennedy is having a hard time dealing with it and doesn't want to spend the night with Willow.