Buffy the Vampire Slayer: Him. 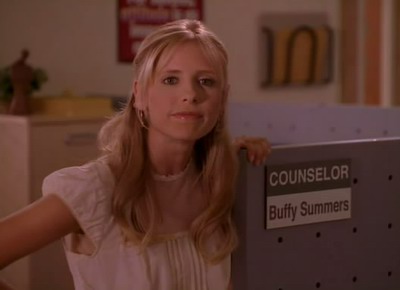 Xander is putting Spike up, at Buffy's behest. Everyone wants to know why Buffy is choosing to help Spike. She doesn't know what she's feeling. Dawn doesn't get people and their complicated feelings of love. Pf course, as she's ranting about "what's up with love" she sees a boy in a letter jacket she decides is the bee's knees. He's not, in case you were wondering.

Buffy is fighting a demon for Anya. D'Hoffryn is sending demons after Anya, apparently. Anya is trying to figure out who she is and trying to be alone, but B thinks they all need to help each other.

Ugh, I so don't care about lovesick-for-football-boy Dawn. Dawn tries out for the cheerleading squad in Buffy's old outfit. Dawn is crying over this boy that she says she loves when she's known him less than 24 hours. She's acting super-psycho, so of course there's a spell involved.

Xander, Buffy, and Willow are Bronze-ing it. They see the boy there with Dawn dancing pretty provocatively in a skimpy shirt. A girl confronts her outside when Buffy makes her leave. There's hair-pulling. Then Buffy gets transfixed too as soon as he puts the jacket on. Groooooss. I just can't even comment on the grossness that's happening right now. Yes, this is going back to the beginning of the series. Dumb high school hijinks. I like it better when it's the main characters and what they're going through. Buffy is making out with Letter-jacket boy and Dawn sees. Xander, Willow, and Anya work on breaking the spell. Xander has an actual flashback to "Bewitched, Bothered, and Bewildered". Xander gets Spike to help. They go talk to RJ's older brother. I guess Xander knew him in high school. The letter-jacket used to be his. Passed down from his dad. RJ comes over to the house and bewitches Willow and Anya too. Now all four of them are fighting. They all separate to try to get the boy. Willow is doing a spell, Buffy is going to kill the principal, Anya is robbing a bank, and Dawn is going to kill herself on the railroad tracks. Lame. Xander stops the spell. Ew, Principal Wood is listening to lame elevator music. Like a Narada sampler or something.

Xander distracts Buffy before she slays. Willow does a spell to find Dawn. Buffy saves her just in time.  Xander and Spike steal the jacket and burn it.
Posted by Mixtress Rae at 12:19 AM