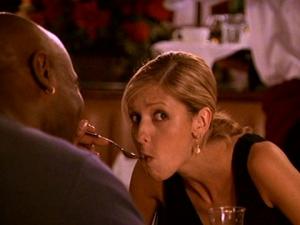 Let me just start by saying that it makes NO SENSE WHATSOEVER for Buffy to go on a date with Principal Wood. He's not my type (he's too clean), but it's not the whether-or-not-she-could-be-attracted-to-him thing that's throwing me, it's that there's a big honkin' evil brewin' and it's out of character for her to let loose and go on a date with some guy that she THINKS doesn't know her sitch, plus there has been ZERO flirtation between them before this episode. ZERO. It would be too exhausting for B to do something like this. I guess it fits in with her periodical I-wish-I-could-be-a-normal-girl whine, but it just feels flimsy. It feels like the writers did this as a way to integrate Wood into the storyline quickly and make Spike jealous at the same time. Another episode I just want to get over with, so let's do it...

We finally see Giles responding to the ax incident with some serious BADASSERY. Hot. See, it can be hot for a man to kickass too, but in mainstream pop culture it's just taken for granted that every male protagonist is a badass and that's boring. On Buffy when someone is a badass, they've earned it. Giles is recounting his story of being a badass in the cemetery with B, Amanda, Kennedy and a new Potential from China, when Spike attacks him. Giles notices his chip didn't go off and Spike notices simultaneously that Giles isn't the First, which is why he attacked him (which is also weak plot-wise, because why would Spike launch himself into Giles if he suspected he wasn't corporeal? He would then fall facefirst into the ground if Giles was the First and reveal he no longer has the chip, as he did do, if he wasn't. Ugh. So many things to criticize in this season). In my hastiness of bitching about the plot details I paused the DVD and Giles just asked Spike how it was supposed to help if he was the First that he just launched himself into him. That helps a little. So now the topic of discussion is why isn't Spike in pain? Buffy and Spike explain. Giles is upset, like he would be. He's regularly touching things again. It's soooo obvious. Urg. 'Course I say this now, but I didn't notice it the first time around.

Giles confronts B about making the decision to remove Spike's chip. Buffy tells him Spike can be a good man. Giles tells her he can hear in her voice that her feelings for him are "coloring her judgment". He's not wrong, but I think she made the right decision. If she chose to repair the chip and Spike kept to his path of redemption, it would have malfunctioned in another three years maybe anyway and they'd never know if he really means to be good. This way, if he intends to be bad again, B will know definitively and be able to make the choice to kill him. This is all my two cents, not something that is said in Giles and Buffy's convo.

Xander sees Ashanti at some outdoor tool place and asks her out. He is always so charming when he meets a cute girl and asks her out. Boys, THIS is how you pick up a girl. Study Xander Harris on Buffy the Vampire Slayer. He employs humor, awkwardness, and doesn't AT ANY POINT mention her looks. This is such a cliche and should never be done. Here endeth the lesson.

Wood asks B out by simply saying, "I'd like to take you out to dinner tonight, if that's all right." Lame. If these two men were asking me out, assuming I didn't know either of them before the meeting and all I had to go on was their style of the asking, I'd choose Xander every time. Even if the Xander-outer-package were something other than Xander's cutie face. Wood has a weapons arsenal behind a dry erase board in his office.

Buffy thinks she might like him. Willow and B are having a normal BFF convo about getting a date which is sweet. Then Xander comes in and shares about his date.

Willow: She evil?
Xander: She's interested in me, so there's a good chance, but I'm hoping for the best.

Jonathan/the First tries again to get Andrew on their side. Tries to convince him to kill the Potentials with the gun Willow got when she was turning into Warren. Anya is telling B she thinks Xander's date is not a real date, that he's trying to make her jealous.

Buffy: Well, it's not working...
Anya: Are you nuts? Of course it's working! Observe my bitter ranting and the shrill edge of hysteria in my voice!

Buffy runs into Spike in the hallway and Spike lets her know he knows about her date and acts real big about it. It's so hot when he's mature. Willow, Kennedy, Dawn, and Amanda are researching Wood and can't find anything from before he moved to Sunnydale. Giles thinks people shouldn't be dating right now. Wood is leading B through a dark alley to a restaurant. They get ambushed by vamps and they both start fighting, staking them all in no time. She's confused, but he isn't. He knows she's the Slayer. Ashanti and X are talking about Anya on their coffee date. Another disparity between these two men's dating styles is that Xander asked Ashanti to coffee and Wood asked B to a super-fancy dinner. I'd rather the less-pressure coffee situation.

Wood hired B because she was the Slayer and he knows something big is coming and wants to align himself with B for the fight. He's known about B since before he came to Sunnydale, possibly why he came. He reveals that his mom was a Slayer, killed when he was 4. So that makes 1975 the time period if he's ten years older than B and it's 2003? Why doesn't she put this together immediately that his mom is Spike's second Slayer? Whatever. B asks him if he has any Slayer powers and he says no, but his mom's Watcher raised him and taught him some skills. Andrew finds the gun and shows it to Jonathan/the First. Andrew asks him about his weaknesses. Andrew is wearing a wire. Willow is listening in the basement on headphones.

Ashanti has Xander tied up at the seal and she's planning to bleed him. Ashanti has a nice Akasha vibe going on. Willow gets a text from Xander in code. Spike goes to get Buffy. They know Xander is at the school because Willow did a locater spell. Spike, Wood, and Buffy in a car together. The seal starts to open as Wood cuts Xander down and B and Spike are fighting Ashanti. After Buffy beheads Ashanti, she checks on Spike first, before Xander or Wood. Xander asks B how her date's going. Wood gives a pointed look to B and Spike. Nipped THAT in the bud real quick, thank gawwd.

Everyone makes fun of Spike for demon's being attracted to him. Giles silences them from their joking, makes them get serious. Killjoy.

Buffy and Spike talk. Spike tells her the First told Andrew it "wasn't time for me yet". Spike says he should go before it is time for him, leave town. B says she needs him, because she's not ready for him to not be here. Spike asks about Wood. She doesn't say anything.

Wood is being haunted by his mommy/the First. She's beautiful. She tells him Spike is the one that killed her. Wonder what's going to happen now.