Buffy the Vampire Slayer: Bring On the Night. 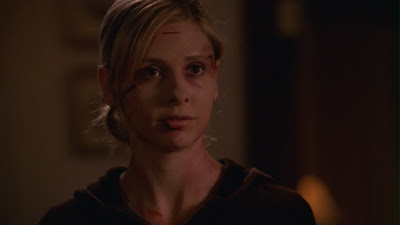 Xander is fixing the house, again. "It's a loop, like the mummy hand." Buffy sees Joyce for the first time. The thing that's super haunting about the First Evil is that it's effectively dead people. It embodies the persona of people that have lived. It becomes them. When she's talking to what looks like her mother, it acts like her mother, talks like her mother, remembers everything her mother would remember. Everything. It is the PERFECT plot device for the last season of this show too because it means you get to see anyone that has died, anyone Buffy has killed, all the old villains, even any vampire is fair game since they're technically dead. Joyce tells Buffy to wake up. Joyce was in a dream instead of in person, apparently. Buffy keeps it a secret from Xander who was the one actually telling her to wake up. Spike is being taunted at the seal by himself, then Drusilla.

Anya and Dawn are still enjoying torturing Andrew, who is now unconscious. Xander calls the seal "Satanic man-hole cover" and "goat-heady badness". Buffy decides they should cover the seal (Spike wasn't there, by the way) and they shovel, like you WOULD shovel, not like Wood shovels. And they see him in the basement. They've all got shovels, attempting to explain why they all have shovels. Willow attempts to do a locating spell to see if they can find the First, but it embodies Willow and there's red lightning and it's super scary. Willow is pretty freaked out and B promises they won't use magic again until they know what they're dealing with. Buffy decides to go out willy-nilly to find the First by herself when she finds Giles at her door with three Potential Slayers. Giles tells them the First's plan is to kill Faith and Buffy and ALL the Potential Slayers so that another is never called ever again. Pretty straightforward evil. Giles took a bunch of books and files from the Council concerning the First before they got blowed up. He tells them the First can only appear as someone who has died.

*Foreboding note: Giles isn't touching anything. He always touches stuff. That's part of why Tony Head is such a compelling actor, because he uses props (eating, glasses, mugs) all the time as he talks, but he's just walking around with his hands in his pockets and no one even hugged him when he got there. This is so they can make you think he's the First in an episode or two. And they are actually not letting him touch anything. And we never saw how he got out of the whole ax-behind-the-back thing from a couple of eps ago. I'm paying super attention this time to see if he actually ever touches anything.

The Ubervamp is torturing Spike. I don't know why. Just for fun? Kennedy is flirting with Willow already. Giles and Buffy are investigating the Christmas tree lot where the Harbingers were camped out 4 years-ish ago when the First tried to get Angel to kill himself. B finds the Ubervamp. She stakes him but he doesn't dust. He's really strong, but not quite as strong as Glory. Buffy decides to run. The sun was coming up, so it recoils when it follows her above ground.

Buffy goes to work and Googles "manifestations of evil". Wood acts real suspicious. I guess the reason they're torturing Spike is to try to convince him to join their side. He won't, of course. The Ubervamp is beating him to death.

The Potentials are super worried about sundown. Giles is putting a lot of pressure on B. Annabelle, one of the Potentials, runs away and gets killed by the Ubervamp real quick. Buffy goes after her and finds her dead. Another Ubervamp fight ensues. He's beating the living tar out of our heroine. M keeps saying, "Level up, Buffy!" Xander, Giles, and Willow find Buffy under a bunch of rubble. Not sure why the Ubervamp didn't finish her off. Morale is real bad because Buffy is so badly beat up.

Buffy makes a rousing speech. "We just became an army."
Posted by Mixtress Rae at 12:51 AM