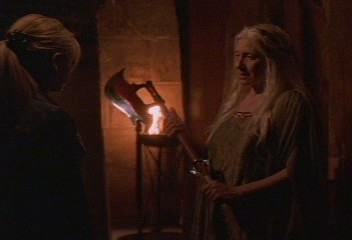 It's a sword-in-the-stone kinda thing. Caleb taunts her about not being able to "pry it from solid rock", but she does it with ease, because it belongs to her. Caleb starts backing away, his voice shaking. The First shows and tells her and Caleb "Faith go boom" and Buffy goes before killing Caleb.

The bomb has gone off. Several girls are dead. Faith is unconscious. They hear a growl and are trying to escape with Faith in tow...it's an Ubervamp after them...a few, actually. Andrew has gotten a bunch of food from an abandoned grocery store. Xander and Willow are trying to find Buffy. The girls are surrounded. Buffy shows up to save them all with her fancy new all-in-one weapon. All the wounded are taken back to the house. The girls think they've been punished because they followed Faith. B tells them it could have just as easily been her leading them into the "trap". Faith is still out. Everyone loves the new weapon. B says she felt like it belongs to her.

Anya and Andrew decide to go to the hospital for supplies. Buffy and Xander are talking about him not being at her side during the fight. Humor is back in the mix. Traditional Xander, Willow, Giles, and Buffy bickering. Thank gawd. Willow and Giles are doing research on the scythe. Willow could do a spell to intuit the origin of it, but she's worried.

Xander kidnaps Dawn and takes her away, per Buffy's request. The First does a spell to enter Caleb. Buffy and Faith bond. Faith understand a bit about what it's like to be B after leading everyone for a few days. Says she'd always been jealous of B, but leading everyone made her feel more alone than ever.

Spike shows up and he and B act weird after the night before. Buffy tells Spike that the reason she's got the scythe is because of him, the strength he gave her. Spike tells B last night was the best night of his life. He's never been close to anyone. He asks her if she was there with him and she says yes. They don't know what that means.

Anya makes a speech about how screwed up humans are. Says that stupid humans fight when it matters and don't quit. Andrew decides he's probably going to die, but he wants to go out as one of the "lame humans trying to do what's right". Buffy is on a quest to figure out why she has the scythe and its origin, letting it lead her.

Dawn wakes up and Xander explains he used chloroform to knock her out. He gives her a letter from B. In the middle of reading the letter Dawn tases Xander and turns the car back around. Caleb and B are fighting now. Things are looking bad for B, then Angel shows up and helps, well distracts Caleb, then stands back and watches as B kills him. Buffy and Angel kiss. Spike sees from the shadows.
Posted by Mixtress Rae at 6:56 PM