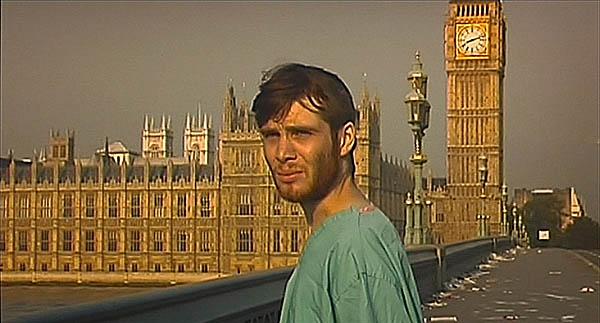 28 Days Later (2002) is a zombie horror film I remember truly enjoying when I first saw it. It seemed innovative and artsy to my 2002-self. Rewatching it in 2015 turned out to be a disappointment I wasn't expecting. What had seemed innovative in 2002-- mostly the music and that the zombies didn't lumber, they ran -- has been copied to such an extent that it wasn't even enjoyable to me this time around. The music is quite good in this film. I can appreciate some of the aesthetic choices as well, such as the zombies being fast and the film quality being like a handheld camcorder with skewed shots that are made to seem as if they weren't framed by a professional. However, post-apocalyptic films just can't do it for me in my post-2011-tornado-destroyed-my-home/life world. I'm done with films in which the protagonist is waking up from a coma to a ravaged city, at least when it's realistic and hopeless. If it's Milla Jovovich waking up with a buzz cut and weapons, I'm in, but scrawny dudes with no personality in a bleak world? No thanks.

Speaking of scrawny dudes, Cillian Murphy as Jim was a tasteless lump of stale white bread to me. I can't see him as a heroic figure and he wasn't painted with the brushstrokes of any sort of personality. Take away those "dreamy" blue eyes, and this kid's got no charisma whatsoever. Naomi Harris as Selena, on the other hand, enters the film as a magnificent hardass with a ruthless violence to match her cold and emotionless line deliveries. However, her character takes a 180 turn almost the moment she meets Jim, turning into a helpless damsel that nurtures a child and forgets how to defend herself. There's a scene in which a group of men are about to rape her and the aforementioned child and instead of the manic violence you'd expect from the character presented at the beginning of the film, Selena simply gives Hannah enough Valium so that she won't "care" that she's being raped and prepares to just lie there and take it while scrawny Jim somehow comes to save them. What?

Despite the fact that half of the film Selena is clutching Hannah in fear, it passes the Bechdel test with only about three lines spoken between the two female characters. Hannah is a tiny bit of a badass towards the end, but not enough to convey even something as simple as agency. Selena is a woman of color and a biracial romance ensues between her and Jim, so points for diversity I guess. The relationship feels so forced, however. There's zero chemistry between the actors and no real reason for them to be into each other save from apocalyptic scenario levels of attraction, but they don't even really fight side-by-side when Selena is busy being meek and Jim is somehow using his 90-pound self to save her ass every twenty minutes.

So, yeah, I basically didn't like this movie at all this time around. It wasn't even that I was offended by the treatment of women so much as I was simply bored. This is the first of these horror films that has bored me. I was disgusted by "Hellraiser". My skin was crawling in suspense and anger at "The Shining". But I was never bored like I was watching "28 Days Later". It just does not hold up. 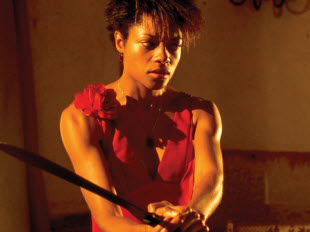