Return of the Living Dead 3 (1993) is, for my money and time, one of the top 5 best zombie movies. I had had memories of this movie being campy in the bad way and not at all good, but I was wrong. Rewatching it today for the first time since I owned it on VHS pre-tornado was an unexpected pleasure. Back in the '90s I loved this movie for Julie (pictured above). I waited for her moment standing pierced and bleeding, hissing like the bride of Frankenstein. This is a zombie movie about the suffering and vulnerability of zombies. Julie has feelings. Julie loves her boyfriend. Julie doesn't want to hurt anyone so she mutilates herself because the pain distracts her from her hunger for brains, if only for a moment. This movie blames the human scientists experimenting with zombies as bio-weapons, not the zombies themselves. The boyfriend continues to help Julie through her transformation from "bad girl" to dead to zombie. It's kind of sweet, actually.

Visually, I am not a fan of zombies. I like pretty villains and zombies are not hot, but Melinda Clarke as the zombie Julie Walker is one of the very prettiest. I have had a serious crush on her since I first saw this movie, though I never saw her in anything else. She became one of my style icons. I confess, on many a night walking alone in the streets of Joplin, I pretend I am Julie Walker. No one fucks with Julie Walker, unless you want your brains eaten, yo. I also identified with her as a teenager because I was a self-mutilator. I have often said that I did it because of self-exploration, and I think that's mostly true, but I also did it because the physical pain of hurting yourself really does dull the pain of other things. I "grew" out of this phase and watching Julie hurt herself no longer makes me feel relief, but I would recommend this movie to teenage girls that cut and are into horror. Watching Julie pierce herself to avoid eating her boyfriend can be pretty cathartic, if you need that kind of catharsis. Also, for the boob-lovers among us, Melinda Clarke's are top notch. Her nudity in this film doesn't feel as icky as it does in most horror because it happens within a more "natural" context of sex between a couple and then later....well, she pierces herself a lot, sooooo, yeah. Ok, so I'm super attracted to Julie/Melinda. Moving on...

As I mentioned above, through the characterization of Julie we get to see that zombies have feelings, vulnerability, and cognitive functioning. Most of the movie, you think she's an exception, but later you find that's not completely true. We get to see her before and after death. She vacillates between extreme hunger for brains and remorse. She genuinely wants to die because her pain is so great. She experiences remorse for her kills and she struggles to control herself throughout the film. She isn't quite as powerful as I like my villains. She is basically the "Angel-with-a-soul" version of a zombie, but it didn't really annoy me. She was a predator, but she was conflicted about it. 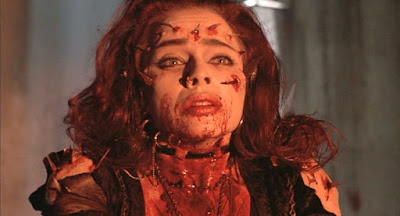 Aside from Julie's character, the rest of the movie is pretty typical zombie fair. The zombies are gross brain-eaters. The humans are heartless scientists. It barely passes the Bechdel test, but there are women in authority in this movie. There are many named characters of races other than white, though they all die. However, everyone dies in this movie save for one named character, and though he IS a white male, he's not one you're rooting for and he's not a hero or anything.

This is a somewhat difficult movie to find. I don't think it was well-liked. It's not streaming, but you can borrow the DVD if you'd like. "Return of the Living Dead 3" is truly a pretty great zombie horror film, as far as the straightforward zombie films are concerned.