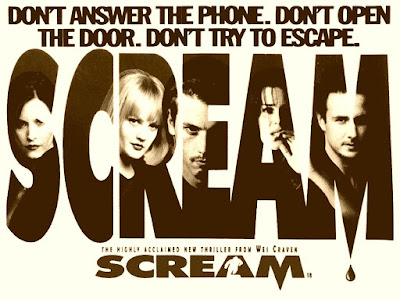 Scream (1996) is THE horror film of the '90s. Straight-up slasher film with meta-commentary on slasher films built into every crevice and a female protagonist that breaks all the "rules" of horror and still outsmarts the killer. Bonus: it's 1996 so you get the fashion, ambience, and music of 1996!

It passes the Bechdel Test even before two MEN talk to one another. I used to find Sidney's PTSD slightly annoying but now I totally get it and I don't really think she was over the top about it. The women aren't overly sexualized in the film. Even the more sexual Tatum is an attentive friend to Sidney, isn't portrayed as stupid, and doesn't shame Sidney for being shut-down. There are three competent women in this movie and even the opening scene with Drew Barrymore doesn't portray her as being overly stupid for getting killed. There's a lot of victim-blaming in horror, portraying women as stupid and therefore maybe deserving to die, but Craven obviously wanted to subvert that trope in this film. I really really like that. I loved this film way before I called myself a feminist.

An interesting flip on the only-virgins-live trope in this film is that not only does Sidney have sex and then live, but immediately after the sex, the smoke seems to clear for her and she starts to put everything together, almost like the sex cleared her head. That sort of makes it sound like she needed the D, but it was really more subtle than that. It was like the sex didn't phase her at all. She didn't look guilty or super in-love as a result of it. She just put her clothes back on and continued with a conversation as if it wasn't a big deal. Having sex for the first time really isn't a big deal, of course, so it was nice to see it portrayed that way in a film. Judging by his boob-grab technique, I'm sure Billy wasn't a great lay either, so she was probably avoiding the "Was it good for you?" question anyway. Ooh, maybe it was like, "I'm sooo over you now that I know I was waiting so long for THAT. Might as well fill the time by accusing you of murder."

Oh, and Matthew Lillard's performance in the last few scenes is just...I won't ever not laugh at that. How did he not get more acting work? I need to see "SLC Punk" again.

I love this movie. It's funny and smart and just a great time. I don't even like slasher-films but this one isn't focused on the maiming of women, so hey, maybe that's why I can like it. Definitely in my top five horror films ever.