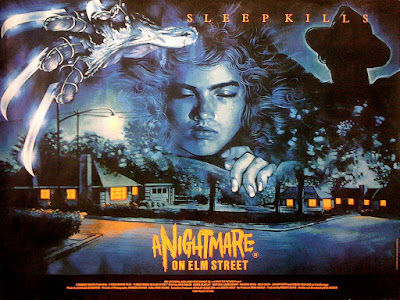 A Nightmare on Elm Street (1984) is an enjoyable and straightforward horror movie from beginning to end. It includes many of the tropes of horror we have come to love/hate without using them against women.

Two of the horror tropes present: The virgin lives and if you have sex, you die. Buuuuut, Nancy never says she's a virgin and both of the characters involved in the sex die, not just the woman. It turns out in the end that it was ALL a dream, so no one really died at all. Bonus: no boobs!!! There were a couple of see-thru nightgown scenes, but they were focused on bush-peeps that were relatively subtle for horror.

I was really surprised at how much I enjoyed this movie. I like a horrific dream theme, what can I say? The teenagers actually look like teenagers, including Johnny Depp (though he's 21 here) in his very first role looking very non-Johnny Depp in khaki pants and Izod sweaters.

I am really pleased at the treatment of women in this movie. It passes the Bechdel Test within the first five minutes. The main character and hero of the piece is a woman. Nancy asks the men (her dad, her boyfriend, etc) in her life to help her, but they fail her repeatedly, so she saves herself! No people of color or other diversity in this film, but that's one of the only downsides to this nearly perfect horror film.

A Nightmare on Elm Street is simply damn good horror. I recommend it.