The Shining (1980) is a legendary horror film for a reason. It is genuinely terrifying. Every shot is gorgeous. The score builds to a level that makes you feel like you're ready to claw through your skin by the end. The film is two and a half hours long and takes its sweet molasses time to build to the level of complete madness you feel by the end. If you like your horror psychologically realistic and simmered to a slow and total terror meltdown, this is the movie for you...

UNLESS you're not into women and minorities being treated like garbage. This film repeatedly names women "bitch" in that really ugly way that women used to be called bitch on the regular by their abusive husbands. There's also a scene in which a black man is referred to as that lovely N-word not even I of the foulest mouth will utter. We are supposed to forgive the "women are bitches" and "black people are n______" arguments because they are uttered by the bad guys, but I'm betting that Kubrick is one of these bad guys. You'll not get forgiveness from me, Stanley.

This movie doesn't pass the Bechdel Test either. Despite the lengthy conversation between the doctor and Wendy in the beginning of the film, the doctor was not named and they only talked about Danny and Jack.

The storyline of this film is a little too close to home for me. I don't like my horror to mirror life. Men go "crazy" and ax-murder their wives and children all the time. I was pleasantly surprised, however,

that Wendy and Danny actually survive. The Shining is thought to be one of the greatest horror movies of all time and there's only one onscreen murder and then the eventual freezing-to-death of Jack the psychotic protagonist.

This movie is actually fairly impressive, but I won't be watching it again. 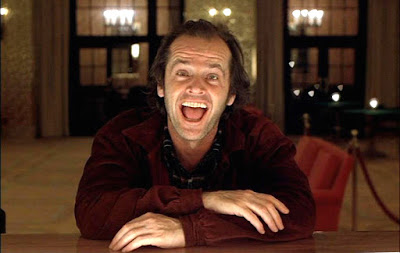