The Bride of Frankenstein (1935) is one of, if not THE, first movie sequel and it's largely thought of to be better than 1931's Frankenstein. The director James Whale was an out gay man. OUT in 1935, children! Mary Shelley's "Frankenstein, or the Modern Prometheus" is the first science fiction piece of culture EVER.

The bride herself, as a character, is one of the most iconic images in horror, though she never came to life in the book and is BARELY onscreen in the film of her namesake. That's the biggest flaw with this film, in my opinion. You see the bride hissing and jerking magnificently for the last maybe 3 minutes of the film. You wait and you wait and you wait for her to come to life and take the monster and Frankenstein down with her superior strength and angry confusion, but sadly, it isn't to be.

The film's score was created especially for the movie, which was a new thing in 1935. The film also exhibited humor, which is something horror is still squeamish about employing.

I have more thoughts about the imagery than anything else about this movie. Frankenstein's monster and the bride are both images that have prevailed in our culture for 80 years now. The machinery in the film used to reanimate the bride is also breathtaking. The bride is sewn into my backpack I wear every day. I want to embody her glamorous horror. She is an inspiration to me. The character has lived on in many other films. There's an excellent article about the progression of the character in pop culture here.

The movie taken on its own without all the iconic history surrounding it is still quite enjoyable. The score was a little distracting and the wilting-fainting-ness of Frankenstein-the-scientist's soon-to-be wife is nauseating, but that scene with the blind guy and the monster is emotional and genuine, even by today's standards. You have sympathy for the monster, you laugh, and you wait for the bride to arrive...that's the film in a nutshell. The cinematography is, as I wrote above, simply breathtaking. 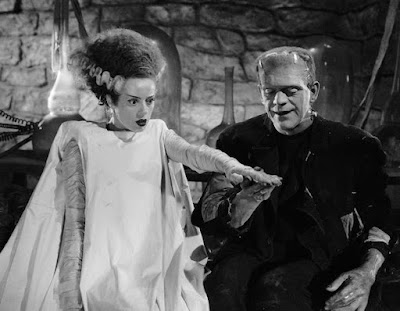