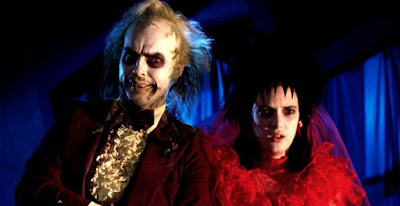 Beetlejuice (1988) is a movie I'm sure you've seen at least ten times, so I'm not going to spend a lot of time describing it. It's a Tim Burton movie that includes all of the usual Tim-Burton-ness and Danny Elfman did the score, 'cause he always does the score for Burton's films.

Still a super fun film. The only thing that upset me was how gross Michael Keaton's Beetlejuice looks, but he's supposed to look that way, so whatevs. Oh, and the characters are SUPER white-washed...was there anyone of color in this movie? The dead voodoo dude might have been the only one.

I was really surprised by the treatment of women in this movie. It passed the Bechdel Test within the first five minutes and with the exception of Beetlejuice's general crudeness, there was no sexism present whatsoever and the women in this movie were just as complex and respected as the men.

Overall an enjoyable movie, great for the whole family! Except for an f-bomb and a couple of other language moments, you could totally watch this with your kid. I know I saw it at the age of 6 when it first came out and I turned out totally fiiiiiiiine.

Treatment of Women/Minorities: 4.0 (very whitewashed, despite being kind to women)