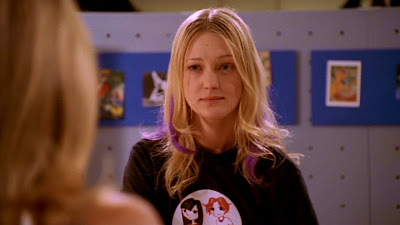 Buffy, Dawn and Xander crawl out of coffins in the mortuary in order to stalk a potential vampire. So, usually they don't rise 'til they get to the cemetery...why do they think this one will rise before the grave? Seriously, was someone else writing this season. Joss, you still there? The chick does come back and Buffy slays.

It's B's first week talking to the kids in her counselor role. Xander and Willow are talking about whether or not she can control her power. Xander makes a power versus control hammer analogy that's pretty awesome. They're visiting Tara. That's such a piece of total scheibe (I know that's not accurate, but I am approximating without German characters) that Tara's gone. She was the most like me of any character, I think. She was shy, goth-like, sweet, and wise. Not that I think I'm wise, but if I were more actualized as a person, I'd be a lot like Tara, I think.

B is talking to a cool chick (pictured) who says she hasn't been doing her homework because she's not going to graduate high school. Buffy asks her why she's not going to graduate and she says next Friday she's going to die. Buffy first suspects suicide, but she says she doesn't want to hurt herself, there are just some things that she knows. Buffy tells the principal. He says, "We just do what we can." Buffy gets Dawn to befriend Cassie to see why she thinks she's going to die next Friday.

Buffy is snooping around a lot and Willow and Xander think she's "seeing paranormal where there's just normal." They find out Cassie's dad is a drunk so they go talk to him. He yells at them, drunkenly. He only gets his daughter one weekend a month and it was last weekend, so it's not him. Cassie sees them outside her dad's house and she convinces them she wants to live, but she simply won't get to.

Buffy goes to see Spike, ask him if he knows anything. He refers to himself as William a lot now. He starts beating himself up because he "hurt the girl", meaning Buffy. Buffy's detective-ing and it's the day Cassie's supposed to die. Buffy is doing really well being a counselor. She just wants to "help". Some boys are doing a ritual in red hoods. They've kidnapped Cassie. Buffy stops them, but they've already raised the demon. Buffy slays, Spike shows up. They save the girl. Cassie tells Spike, "She'll tell you. Someday she'll tell you." Aw.

Buffy even stops an arrow from hitting Cassie on the way out, but then she dies of a heart condition or something. She was going to die no matter what. Sometimes you just can't help. This is very after school special. Lame.
Posted by Mixtress Rae at 12:15 AM