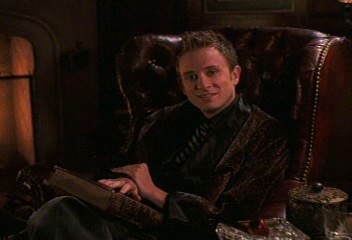 Andrew is telling his version of everything that's going on through his own video diaries. It's super hilarious and awesome, of course. He's interviewing everyone and following B around as she slays. Buffy gets into another speech and Andrew slips out of the room as B tells everyone about the vision she saw. Via Andrew, we get a much needed reprieve from Buffy's speeches. Andrew is retelling the story of him being a "super villain" and "facing Dark Willow". It's also cute. I love episodes like this.

Everything is crazy at school. Buffy is trying to help everyone. A girl is disappearing, someone throws rocks at Wood, a kid explodes from stress. Andrew interviews Anya and Xander. Anya tells Xander "You still love me." Buffy tells Wood about the vision at the seal. He gets possessed for a second, calls Buffy a "whore". Xander and Anya love each other and both admit they don't know what that means. Andrew gets it on tape and watches it over and over.

Flashback to Andrew and Jonathan in Mexico. They dreamed about the First Evil. There was a flash of the row of cheese from "Restless" too for a sec. Why are they dreaming about it? They don't have special powers or anything and I can't imagine the First really finds them useful enough to lure them back to Sunnydale. They're questioning Andrew, since he was the first to see the seal. The knife the First had him get to kill Jonathan has an inscription on it. So maybe since the knife was in Mexico, that's why the First used him for its bidding. There's been rioting at the school. They're taking Andrew to the seal because he knows the language on the knife that the seal responds to, or something. There's still kids rioting and they're violent. When Andrew and Buffy get to the seal they find chanting kids that have turned themselves into Harbingers. Anya and Xander did it. They're unsure what this means. They decide it was probably a "one more time" and now they're ready to move on.

The seal is glowing. Buffy tells Andrew his blood (the blood of the one that opened it) is the thing that closes it. She taunts him. He cries. When his tears hit the seal, it closes. After it closes (or stops glowing, rather) the rioting upstairs stops. Andrew tells the camera he might not live through the fight and that he killed his best friend. He's finally dealing with what he did.
Posted by Mixtress Rae at 3:21 PM