Buffy the Vampire Slayer: Beneath You. 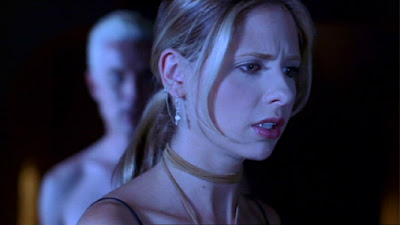 Germany, a "Run Lola Run" sequence...another girl running from something unseen. She's super awesome-looking with pink hair and a nose ring. She gets killed. She says after she was killed, "From beneath you, it devours." Buffy's first prophetic dream in a looooonnng time. In the last ep the speech the First (all the different dead folk talking to Spike at the end) was talking about going back to the beginning. Going back to Buffy basics. It's a bookend. Spike is hunting rats in the basement. There's an earthquake. Xander is driving the Summers' women to school. Buffy's first day as a counselor. First thing she does is go try to find Spike.

Back in England, Willow is preparing her trip home. She's reluctant to go. He asks her what she's afraid of. What if, what if, what if? He tells her to trust herself, but he can't guarantee her friends will want her back.

A woman walking her dog. The dog gets eaten and she runs into Xander and he takes her back to B's. Spike shows up looking normal, says he needs to talk. He mentions the basement and they're all like "What? Why didn't you tell me?" Spike says something is coming. "Big, ugly, and damned." He says he can lend a hand if she'll let him. Xander is flirting with Nancy, the one whose dog is now eaten. That probably wasn't grammatically correct, but something is wrong with my brain today. It's all fuzzy and lame. So, I refuse to care about grammar, damnit!

The plan is that Xander take Nancy home, Buffy and Spike are going after whatever ate the dog, and Dawn is staying home. Xander reminds Buffy Spike tried to rape her and she reminds him she can take him. Dawn threatens Spike, tells him if he ever hurts Buffy, he'll wake up on fire. Buffy asks Spike what happened to him. He tells her it's something about the angry dead in the basement. She's still shaken up about the attempted rape. She confronts him about it. He says he can't say sorry or ask for forgiveness, but he's changed. He basically tells her he's there, and she can use him if she wants, for help with Apocalypses and shit. She says there's something he's not telling her and he says there is, but since they're not BFF anymore, he's not telling. He leaves.

Xander is super charming. Nancy asks him out, the ground dog-eating thing is after them. It looks like a penis with teeth. It comes out that Nancy has an ex who's a psycho. Nancy made a wish to Anya, apparently. Xander, Nancy, Buffy, and Spike find Anya at the Bronze. Nancy is a little overwhelmed by all the drama between everyone (Spike with Anya, Anya with Xander, Spike with Buffy). Anya notices the soul in Spike. Spike and Anya start fighting, then Buffy jumps in. He's mean. Nancy leaves and the worm-monster that is her ex is after her again. Buffy and Spike help her. Xander talks Anya into reversing the spell. Spike stabs the worm-monster just as he turns back into Nancy's ex and Spike's chip goes off. So we know he still has that. He looks shocked for a second. Then he starts muttering crazy again after apologizing to the guy. Buffy calls the police. During Spike's rant he says "From beneath you, it devours." He runs. Nancy leaves. Xander and Anya show. Buffy goes after Spike. Finds him in a church. He's super nutty. Keeps talking about a "spark". Ok, he wanted the soul. He starts talking about trying to find the "spark". The missing piece that would make him fit. Through his mutterings, Buffy realizes the "spark" is his soul. She asks him why and he says, "To be the kind of man that would never..." He hugs a cross, sizzling. "Can we rest now?" Buffy is crying.
Posted by Mixtress Rae at 11:27 PM