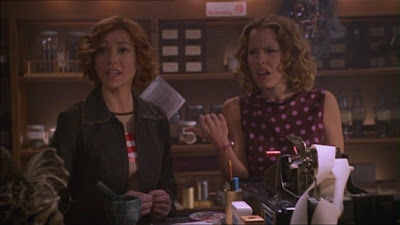 Xander and Anya are talking about Buffy's relationship debris. Buffy's kicking ass at a convent and asked the nun she saves from vampires lots of questions about how one becomes a nun, etc. Giles is getting ready to make a trip to England to check out some books at the Watchers' Council, since they are coming up with nothing in Giles' library on Glory. Anya and Willow are fighting about taking care of the shop while Giles is gone. No one seems to trust Anya.

Joyce is healing. Dawn talks to Buffy about relationship stuff, comforts her a bit after Riley leaving. Everyone misses Riley. Spike is rehearsing giving Buffy some chocolates. Trying to be sweet. He has a mannequin dressed in her clothes with a blonde wig. Obsession, like I said. He ends up yelling at the mannequin and hitting it over the head with the chocolates and starts over. More Anya/Willow fighting.  They're putting Xander in the middle of everything all the time. They run Xander and Tara off. Their fighting ruins a spell Willow was trying to do and conjures a huge troll. During a conversation between Tara and Buffy at school, Tara tells her about Xander clearing out at the magic shop earlier, and Buffy gets all hysterical thinking Anya and Xander are in trouble. They "have a miraculous love". Spike sees Xander at the Bronze and sits and talks to him. Tara and Buffy go to the shop and see the damage the troll caused and go after it. Anya and Willow are gone looking for him too. Xander is confiding in Spike. The troll shows up at the Bronze. Willow and Anya show up. Willow says "I wish Buffy were here." and then Buffy shows up with Tara immediately after she says it.

It is revealed that Anya dated the troll. She turned him into a troll after he cheated on her. There's a bunch of people in the Bronze just watching it happen. There's a bunch of destruction before the troll takes off and Spike helps make some disaster victims more comfortable and "you want credit for not feeding on helpless disaster victims?!" He's trying to impress her, which I used to think was cute...but really it's kinda scary.

Willow and Anya go back to the magic shop to find a spell to re-trap the troll. Anya is jealous of Willow and Willow is jealous of Anya. They kind of work it out. The troll shows back up and Xander shortly after who tries really hard to kick the troll's ass. They're destroying everything in the magic shop. I hate that. The troll gives Xander the choice between Anya or Willow...he's planning to kill one of them. Xander refuses to choose. The troll breaks his hand or wrist or something. The troll says something to Buffy about how Xander and Anya won't last and this gives Buffy extra oomph to kick the troll's ass. And then she cries after Willow sends the troll to "troll land".

Giles comes home and tells Joyce and Buffy that the Watchers don't know anything yet, but they're looking into it. Joyce says something about Dawn being the Key and Dawn overhears part of it, but not enough to know she's the Key, just that they're talking about her being something.
Posted by Mixtress Rae at 6:30 PM