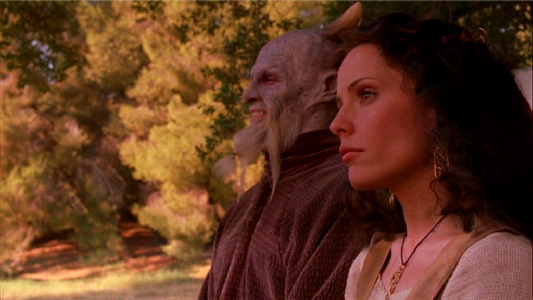 Anya-centric episode. Xander, Buffy, and Dawn are helping Willow unpack in Buffy's old room as Xander is explaining that Anya isn't into vengeance anymore. She's going to come around. Then we see Anya sitting amid a dozen dead fratboys.

Anya, 880. Her name was Aud then. I think that's pretty much the coolest name ever. Her troll comes homes from work or something. They have rabbits everywhere.

Anya, in present time, is washing blood from her hands. Buffy is talking to Spike. He's telling her he's seeing things lately. Buffy wants to help. She tells him "It's you and it's me and we'll get through this." She's overly comforting...then the real Buffy comes in. She wants him to leave the basement. He tells her he doesn't have anywhere else to go. Willow sees Anya leaving the frat-house and tells her how excited she is to be coming back to school. Anya has a cover story of a boy she's sleeping with. Willow notices blood on Anya's hand and goes into the frat-house to check it out. She finds a lot of blood and then a crying girl in the closet. The girl tells Willow a story about being humiliated in front of all the frat-boys and she says she said "I wish you could know what it was like to have your hearts ripped out". Oh no, Anya. It was a gigantic spider that Willow threw out the window real quick.

Back to 880: Anya has just turned Olaf into a troll and D'Hoffryn visits her, introduces himself. Suddenly they're speaking English. He renames her Anyanka and offers her a job.

Willow calls B to tell her about the spider demon. Halfrek is congratulating Anya on her frat-boy mayhem. Anya is upset. Willow goes to confront Anya. Anya tries to tell Willow those boys got what they deserved. Xander and Buffy go to find the spider demon. They find it. Buffy kills it. They go back to Buffy's and B talks about "hitting the research" but Willow is there and tells them how it got there. Buffy says she has to kill Anya.

1905: Halfrek and Anya are celebrating after she facilitated a huge massacre. Xander is defending Anya. He wants there to be some way to not have to kill Anya. "This isn't new ground for us. When our friends go all crazy and start killing people, we help them." Buffy makes a big speech about how someone has to draw the line and "it's always going to be me". Xander is telling her she acts like she's "the law" and she totally does. He brings up Spike. Buffy really could try to talk Anya out of being a demon...give her a little chance. Xander leaves to try to find another way as Buffy leaves with a weapon. Willow does a spell to summon D'Hoffryn. She wants to talk to him about Anya.

Xander finds Anya, lamenting about her kill. Warns her Buffy is on her way. Then she arrives and Buffy and Anya fight. Buffy stabs her in the chest.

2001: Flashback to "Once More, With Feeling" episode. Anya sings a sweet song about becoming his wife. Flash-cut to Anya waking up from being stabbed. She pulls out the sword. They fight some more and Xander pushes Buffy out of the way before she stabs her again. D'Hoffryn arrives. Deal is this: the life of a vengeance demon to take back the lives of the frat-boys. Anya chooses to sacrifice herself. D'Hoffryn chooses to kill Halfrek instead, right in front of them. She's ousted as a demon and she wishes she was dead. Xander goes after her. He tells her she shouldn't be alone. Anya tells him she's always let herself be defined by others. She needs to be alone for the first time. Anya is so interesting.

Anya and Olaf (actors that played them, of course) spoke 8 pages of Swedish for the scene with Aud and Olaf. Aud is the name of an actual Viking woman known for her sense of humor and money-managing skills. How hilarious is that? God, I love the name Aud. LOVELOVELOVE. I have to make a character named Aud in a novel or something.

The thematic death of the vengeance demon in Anya was when Anya gets stabbed just as she's saying, "I'm a vengeance....."
Posted by Mixtress Rae at 11:03 PM