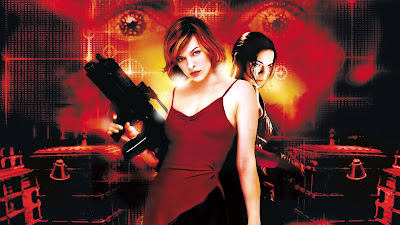 Resident Evil (2002) is a nearly perfect zombie film. The creation of zombies by science experimentation and corporate control (they got that from "Return of the Living Dead 3", remember?) is plausible and laid out in a pretty logical way in this film. The transition to zombie after being bitten is slow and gradual, which I really like.

There are three people of color in the main cast of 10 and two women. It passes the Bechdel test. Everyone dies except Milla. Milla is hot. The score is done by Marilyn Manson. When I first saw the movie, this gave me hope that Marilyn's music would eventually transition into scores and ambient music. I think this was a logical progression for him, but he hasn't gotten there yet. This score could be considered Manson's last great work, if you ask me. No one did, but that's my two cents. One of the only downsides in this movie save from there being a shortage of women is that all 6 white dudes in this movie were indistinguishable from one another. I seriously could not tell the white dudes apart until the majority of them were picked off. They were like vanilla Backstreet Boys of indiscriminate features. The only eye candy in this film was in the form of Milla Jovovich and Michelle Rodriguez, and theirs is an excellent candy for eyes, so I'll allow it, though I would have loved to look at a hot boy or two.

Milla's fighting style is mechanical with an economy of moves, which is my favorite fighting style. There's this really great iconic scene at the end with Milla walking down a post-apocalyptic street with a partially shaved head, hospital gown and a giant gun (ahem, "28 Days Later"--you big copy-offer!) and you just know that she's going to be a complete badass for four more films. I can't believe there's that many, but I think I'm going to watch them all now.

Resident Evil is a really very spectacular zombie film. The women, though few they be, have agency and personality. Michelle/Rain isn't treated like a "thing" at all even ONCE after she's bitten early on in the film. Her decision to stay with the group and continue fighting is never questioned, though they all know she could turn at any moment. They treat her as a human, refuse to leave her behind, and don't taunt her for the zombie she will soon become. Milla's character is a person in power that has been taught to fight and trusted with big corporate secrets. She also cares about humanity and is a freaking hero.

The most empowering zombie movie I've ever seen.