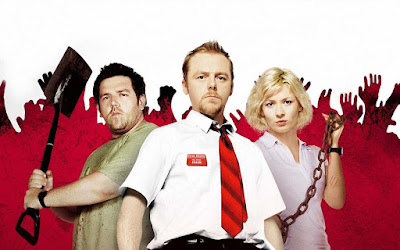 Shaun of the Dead (2004) is half slacker-bro film and half zombie parody. The tone feels similar to "Hitchhiker's Guide to the Galaxy". The best bit of this movie are the opening credits comparing humanity to zombies. You go in knowing this movie is going to be about zombies and you realize that the plague hasn't happened yet when the film begins, though everyone is lumbering, looking at their phones, and shuffling along to work. This film is unique in the fact that the outbreak is only starting to creep in as it begins. The cool part about that is that people aren't noticing it. You're seeing zombies in the background and when the characters see them, they think the zombies are drunk or think nothing at all, which is probably how humanity's reaction to zombies would really happen.

Beyond that, this movie is a pretty typical slacker-bro film wherein the bumbling 30-something protagonist that can't manage to do anything with his life save for playing video games and going to the pub somehow saves the day when the zombies come. The part that makes me forgive this a little is that the zombies are REALLY slow and ineffectual and Shaun isn't really THAT competent at fighting them at all. The reaction to the zombies by the characters seems mostly believable. No real heroics take place except that everyone seems to inherently trust Shaun to be their leader for no real reason other than he is acting like he knows what to do. Which I suppose is kinda believable too.

I didn't plan to watch "Shaun of the Dead" again because it seems that the further into his career he gets, the more Simon Pegg forgets that women exist too. This movie doesn't pass the Bechdel Test until an hour in, which is particularly infuriating because Liz (Shaun's girlfriend) is roommates with a woman and they're in several scenes together before you see them interact. This movie suffers from the my-girlfiend-is-cool-and-competent-but-no-other-women-are trope as well. The roommate Dianne seems like she might be really cool but they don't give her anything to do and then she just anticlimactically runs out into the zombie hoard at one point. No one mourns her. All of the sudden I'm like, "Where's Dianne?" That's how little they paid attention to her demise. Shaun's mother is also very clueless. They give her no personality other than "mother". There is another female character that is the leader of a group identical (with switched genders) to Shaun's but she's mostly there as a sight gag. Another big feminist issue I have with this film is that both Shaun's mother and BFF Ed become zombies by the end. Shaun kills his mother but chooses to keep Ed around, chained in his shed with video games so he can still "sneak off" to hang out with Ed despite his new living-with-girlfriend existence. Why was Ed important enough to keep around, but mom had to be "dealt with"? Also, Liz spent the first part of the film breaking up with Shaun because their lives were stagnant and then after the zombie fiasco she's shown being totally FINE with a stagnant life. Her needs weren't met and she was talked out of even having any anymore. Also, why is no one upset that EVERYONE else died? I know this is supposed to be a comedy, but Shaun had to kill his mother and stepfather and Liz lost her roommate! They wouldn't just be all cozy on the couch talking about tea without any baggage.

There are ZERO people of color in this film. Maybe a stray black zombie, but none of note even. There's also the use of "gay" as "lame" in several jokes. I used to make that joke too in 2004 without knowing any better.

Overall, it's an enjoyable stoner-zombie movie, but I don't think we should trust Simon Pegg anymore. He's a nerd that is fighting for his fellow straight white male nerds, perhaps, but he doesn't create female characters with their own agency/personality and he doesn't care about people of color. His later films are WORSE in all of the slightly annoying aspects (stoner dude humor, slacker types being heroes, women on the periphery, etc) this film presents.