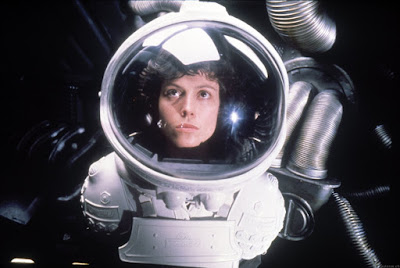 Alien (1979) is one of the first horrors in space. It's truly terrifying mostly because of stupid-decisions-humans. There's android science guy that only cares about studying the creature. There's helpless chick. There's a few complete asshole dudes and one bumbling captain. It's not really a military style crew, however, so I did find their bumbling-ness to be mostly believable reactions as hired space crew members of the future. I assume it's the future, anyway.

A lot of beautiful slow shots in this movie. Sigourney Weaver is the only person with any brains on the entire crew. Seriously, NO character is competent or has any depth whatsoever except Ripley/Sigourney. It passes the Bechdel Test. There are two women on the small crew and 2 (?) people of color. The white dudes die first. There's a bunch of scenes with a cat.

Visual Effects: most of the set pieces and the design of the aliens was done by an artist named HR Giger. His art is grotesque, intricate, and literally FULL of penises, vaginas, rape, etc. Most of Giger's art in the film is more metaphorical-penises and vaginas, but you do have to see wayyyy more of the first dude killed than you'd like. I mean, what is that underwear he's wearing? The visuals in this movie are tamer than the typical Giger-fare, but the alien's head is a penis for Pete's sake! And the eggs have vaginal openings! And there's ejaculate everywhere! Gross. This movie's visuals are really really gross and also mesmerizingly beautiful. "Beautiful and grotesque...and all the rest of that bug stuff."

Also, what's the deal with the ship's computer being called "Mother"? That's a little Freudian-weird, right?

This movie is a legend and I can mostly see why. Sigourney is pretty freaking amazing. She is rational and a problem-solver throughout. She even saves the cat!