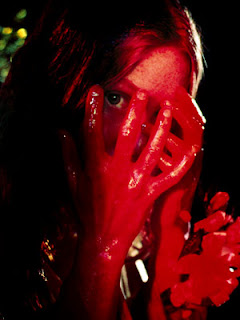 Julianne Moore will do a great job at playing Carrie's mom in the remake. I can't wait! Her voice has such a cadence that sticks with you forever. When I first saw this movie I had it checked out from the library and I kept rechecking it for the entire summer (no renewal limits back then?) and showing it, one-by-one, to all of my friends. I think it was 6th or 7th grade. It was my first favorite horror film.

Why do the Jesus' eyes in the statue glow? That's so freakin' creepy. It's so heartbreaking to think that there are some women that might even still grow up with moms like this this or for whatever reason, don't know about their periods before they get them.

Is it really that much of a punishment to force everyone to do a bunch of exercises? That's only going to make them hotter for the prom. I would relish someone forcing me to work out. I never had to do anything in gym class. I kind of wish I would have. Learning coordination and athleticism could only help me. God, I hate John Travolta. I hate him so much that "Carrie" might not make the cut. His character-rating is a 0 simply because he's John Travolta. Every shot in this movie is really good. You can pause it anywhere and the color pops and everything is framed really well.

Sue Snell's hair is still the best hair I've ever seen in a movie. I WANTED her hair then and I WANT this hair now. Why can't you go to prom without a date? That's ludicrous. Tommy is so cute with his curly hair. I think I have to fast forward through the pig slaughter scene. I can't deal with it anymore.

I love that Jesus is this silent, scary overseer of everything in the White household. The only light in the house is Jesus and Carrie's pretty face.

Ugh, can I give Travolta a negative number of points? Ew, trying on lipsticks?! So unsanitary. "I can see your dirty pillows." Mommie dearest has got nothin' on Margaret White! I think all proms should look like the prom in this movie. I was so disappointed that mine wasn't like this. No men wore ruffles and no women went braless at my prom--how boring is that?

Time for the spinning dance scene. I might throw up.

Not even the cutting board is safe!!

I still get chills when the ominous music starts as Tommy and Carrie are walking to the stage. My hair is standing up...I once recorded this part of the movie onto a mixtape so I could listen to it over and over. Now comes the payoff. You messed with the wrong chick! Split-screen. You're trapped, bitches! Telekinesis is so cool. I have goosebumps all over...the fire just started and Carrie is silhouetted in blood with her arms out. This is one of the only truly iconic movies that I discovered on my own. I really have no idea why I even picked it...probably the image of a woman covered in blood. I've always been into that.

Candles on the bed? That's not safe. Michael said, "Only a crazy person could light that many candles." Time for the Orgasmic Death of the Mother. Love the sound of Margaret's arm being pulled off the wall. Each time I showed this movie to a friend I would watch their face with baited breath waiting for that arm to come out of the ground...Michael was distracted this time, so it didn't have the intended effect. Can you believe he hasn't seen this?!?!