The hardest part of "scientifically" picking apart the art that you love, besides the obvious ramifications of infusing intellect upon something that maybe shouldn't be thought about quite so much, is that you have to decide how to define your parameters at every turn, a task that's sure to give you pain in the membrane. Yeah, I said it.

The first question I had to ask myself was how a show even gets to be on my top shows list. At first, I decided not to include reality competition shows such as Project Runway and RuPaul's Drag Race, using the lack of a plot-driven storyline as my reasoning. Earlier today, with my composition book, a pink pen, and many scribblings I realized that RuPaul has to be on my list. It's no less plot-driven than Daria or The IT Crowd. I love it because it represents a chunk of culture that's entertaining, moving, and beautiful to look at. I've never missed an episode. I watch it every Tuesday night with my girls Kim and Lindsey in a Facebook chat box nearby. I've rewatched seasons. So

Ru, your show was added to my quest for the top ten TV shows!

As a newly-more-aware feminist, I couldn't include Big Bang Theory or That '70s Show in my list, though I have previously considered them favorites and are both shows I've spent many hours enjoying. On both shows the females are outnumbered and sexist jokes are sprinkled throughout the dialogue like glitter at a strip club. Donna and Penny are both fierce women with their own agencies for the most part (and two of my favorite female characters on a sitcom), but they both make and endure sexist jokes with a smile most of the time. Their male counterparts (Eric Forman and Leonard Whatever-His-Last-Name-Is) are lauded as wonderful boyfriends and sweet men, though they are both contemptible, arrogant, sexist assholes, if you ask me. You didn't, so I'll move on.

Then I wondered if fluff shows like Aqua Teen Hunger Force, Beavis & Butthead, and Sifl 'n Olly could count amongst my favorites. These are shows I enjoy without higher levels of thinking...well sometimes my levels of thinking while watching these shows are, ahem, high, but not intellectually so. Under these considerations, even Daria skirts the line of "Is this GOOD enough to be a favorite?" I'd say Daria represents the type of outsider-feminism me and my friends exhibited in high school in the late '90s, so that means something, I suppose. 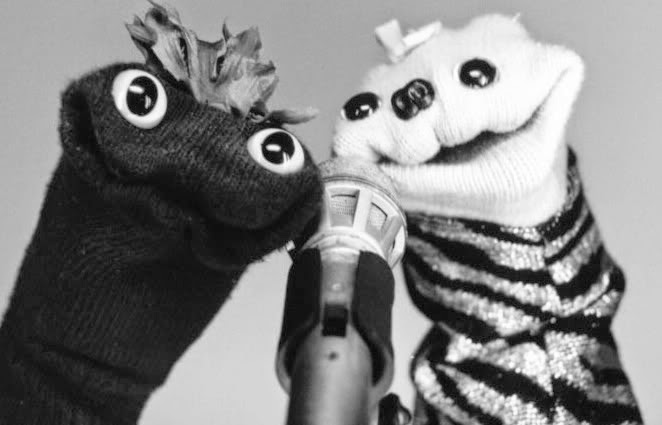 Sifl 'n Olly means a lot to me, but the lack of DVD releases of the seasons leaves me with the arduous task of tracking down as many episodes as I can find dubbed from old VHS tapes onto YouTube, so unfortunately, it's out of the running for a stupid reason. If anyone has all of these episodes on VHS, please mail them to me and I will upload them to YouTube and send you a package of amazing kitschy things and love you forever. I live for these hilarious sock puppets!

In the vein of television that simply makes me laugh uncontrollably, I have a soft spot in my giggle bones for Beavis & Butthead and Aqua Teen Hunger Force. Shake reminds me of my brother Sagan, the presence of which both comforts and fills me with overwhelming outbursts of love. Beavis and Butthead were two figures that were there as I grew up, reminding me of my male friends. They were the way I came to understand adolescent boys to be, and overall, I think that's still a pretty accurate portrayal. I always identified with Beavis more, myself, if you care to know such personal details.

Even after my top 13 and their rating parameters were finally decided upon, I had to figure out a way to apply my ratings of the parameters so that they could make the shows numerically comparable to one another. It got complicated, as I tend to make things. I decided upon a point system of 0-10. As described in an earlier blog entry, I knew I'd be averaging the scores.

CHARACTERS: For a show to receive top marks in character development, I have many requirements. First, I will isolate the Core Four characters in each show. For The Office, that would be Jim, Pam, Michael, and Dwight. Then I give the show one point for each of the Core Four that I like. I then give the show two points if at least two of the Core Four are women. The show then gets one point each if it portrays/represents the following people in a positive light: trans-individuals, people of varying body types, people of varying sexual orientations, and a variety of race representation.

COPING: I watch television to either escape (comedy) or learn skills to cope (fantasy/drama) with my life. A show gets up to five points if it allows me to be sufficiently distracted from and/or better equipped to cope with life. The other five points are allotted when I feel that a show as a whole has achieved a specific goal. This "goal" is one I perceive as the viewer and may be a "goal" it achieves for me specifically, and not one any of the creators intended. For example, Buffy has a very clear goal of being a feminist show with a feminist icon. Buffy has achieved that goal, completely. A show like The Office on the other hand, doesn't have an obvious goal, though I do find it to be a good-natured show that's HILARIOUS and awkward and changed the way comedies were created from then on. Without it, we might not have Parks and Recreation or New Girl.

With all parameters set, I've settled in for some serious television watching/scrutinizing. Today I watched three episodes.

Let's begin with Daria's "Malled". It's the fifth episode of the series wherein everyone takes a school-enforced field trip to the Mall of America. Honestly, I still have no idea what my favorite episode of Daria would be. Unfortunately, plots in the show are not memorable enough to choose a favorite, for me anyway. What I like about Daria is what I like about my good friend Lindsey, dry sarcasm and a fierce wit. Daria is a feminist icon, to be sure, but her day-to-day activities don't make big statements or quotable impressions most of the time. I can watch Daria with the type of partial attention my teenage-self-on-the-phone probably paid it the first time around. Daria and Jane (and even several other secondary characters) are great characters and high schools and malls are two of my favorite settings in film, but there's not a lot else with which to assess here.

I was very disappointed to find that what I typically list as one of my favorite episodes of television ever, The Office's, "The Injury", does not pass the Bechdel Test. Pam talks only to Jim, Michael, Dwight, and Oscar in this episode. Angela talks only to Dwight. Phyllis only talks to Michael. Kelly doesn't even have a line in this episode. As a whole, the show represents females in an honest way, though they are often outnumbered and out-shined by their male counterparts.

With that said, I quote this episode almost every day. "I can feel the blood coursing through my foot veins!" I find several scenes to be laugh-out-loud funny. It is an excellent example of comedy in exactly the way I take my comedy: weird, awkward, and sweet-natured. It's the one where Michael clamps his foot on a George Forman grill and Dwight gets a concussion and is really nice to Pam all day.

The characters on this show are very endearing to me. They are all essentially good human beings and I prefer them to the assholes of It's Always Sunny... or Seinfeld. I have rewatched the entire series at least twice and will do so again and again throughout my life. Getting swept up in Jim and Pam's love-story is something I look forward to doing over and over. It is one of two popular heterosexual love-arcs I enjoy as much as the rest of the world. (The other is Pride and Prejudice, btw.) If I was the type to channel-surf, I'd watch The Office anytime I found it on. I suspect the show will make my top five.

The IT Crowd is a new favorite for me, having only just watched it twice through in the last few months, but I liked it immediately. What started as a huge crush on Moss (above, quite possibly the cutest boy on television EVER, in my opinion) blossomed into a genuine appreciation for both Jen and Roy, the other two main characters of the show. A British comedy about a nerdy tech-support trio working in the basement of a big corporation, all three of whom are pretty to look upon? Sign me up! I think I have a predilection towards workplace comedies because they tend to stay in the realm of not-too-emotional and not-too-serious. In fact, all three kinds of television I enjoy (workplace comedy, high school drama, and fantasy -- hey, Buffy is all three!) have barriers to bald emotions of an intense nature. I have no problem dealing with intense emotion if I am tricked into it by falling in love with a vampire, but don't show me real tragedy and sadness.

I don't seem to have much deep thought about The IT Crowd. I enjoy the eye candy (and humor, because Richard Ayoade's character is perfection) of Moss while laughing often at every other character/situation of the show. The episode I watched today was "Aunt Irma Visits". The boys get sympathetic-PMS alongside Jen and hijinks ensue, basically. This episode also includes the rare cameo from a sexy gothed-up Noel Fielding. I'll talk more about my crush on HIM in a different post.

Sadly, this episode also does not pass the Bechdel Test. However, as the show typically deals mostly with the three main characters, two of whom are men, this is not as big of a slight to me as it is when a show with a larger ensemble cast, such as The Office (a show that has NO excuse to ever have a non-passing episode) doesn't pass.

Once The IT Crowd has been seen by me four and five and six times and inevitably become part of my vocabulary, I will have more to say about it. For now, enjoy this, my current favorite quote from Moss: