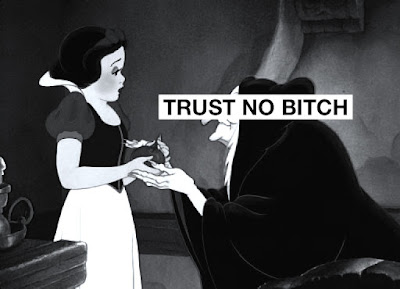 So there's this neighbor we have with a redheaded fluff-monster that Luna (our husky/pitbull/heeler mix) and other dogs in the neighborhood have attacked several times. Here's WHY: the dog's owner SAUNTERS through alleyways and talks to dogs that are barking bloody murder at him and his beast. He stops and stares at dogs that obviously want to take his bitch out. He doesn't avoid dogs that have previously attacked his dog. Luna has attacked her three times now. Today the guy decided to call Animal Control on us. We now have a court date and other hoops to jump through.

Luna IS aggressive. She is also an escape artist. We will plead guilty. I have been confused by her aggressive behavior her entire life. You never see it coming. She has attacked every dog she's ever shared a house with and also this neighborhood dog. She does NOT like other dogs. I don't know exactly how to handle her.

...buuuuuut, why would you not avoid an alleyway next to a yard with a dog that has attacked your dog before? Nay, a yard that has housed a different dog that has also attacked your dog. If not avoid the alley, then walk past it briskly at the VERY least. Why stop and taunt? The guy was still sauntering about in our piece of alleyway as Animal Control was handing us the citation. That's how long he was out there. This guy. Seriously.

I was real mad at Luna at first. When Animal Control let us know who had lodged the complaint I ceased being mad. As a dog owner, I would never continue to place my dog in prolonged contact with dogs that wish her harm.
Posted by Mixtress Rae at 12:05 PM