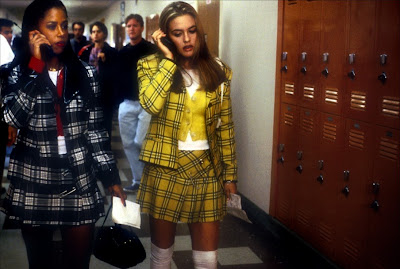 (Oh, and I also already scored "The Crow".  I decided to disqualify it because it was pretty much just the first act that I enjoyed.  I like to put this movie on when I'm "gothing up" to go out on a spooky night.  I still get really jazzed up watching the first 20 minutes, but the rest is just a lot of darkness and shooting.)

Clueless makes me happy.  Cute '90s outfits, snappy dialogue, based on an Austen novel, has Paul Rudd (one of my top five heartthrob screen-boys ever alongside Seth Green, Justin Timberlake, Michael Cera, and John Cusack pre-2003)...what could be wrong with this movie?  Well, I predict that nothing is wrong with this movie, but let's check it and see, shall we?

Touchscreen monitor in 1995?!?  Three songs within the first two minutes.  Remember how funny it was when you first saw this movie that Cher and Dionne were talking on their cell phones in the hallway?  Like anyone would ever DO that?!  As IF!

"The maudlin music of the University station?"  I used to do that dance that Cher and Ty did at the party all the time with, like, everybody.  Ugh, I hate Christian.  "You think just because Sammy Davis, Jr. died, there's an opening in the Rat Pack?"  Alicia Silverstone is so good at whining.  My first driving test was kind of like Cher's.  I failed to yield and nearly plowed into a semi in front of the DMV and then afterwards asked how many points that almost-tragic wreck took off and the woman said, "Oh, you failed." and I had to drive us immediately back into the parking lot.  Yikes.  I passed the test the very next day, however.  I was a slow-starter in the driving category.  I really had to LEARN to see stop signs.  ;)