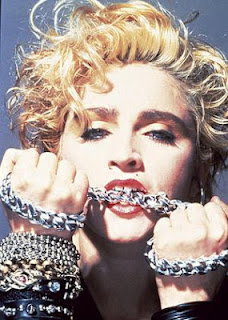 I've been trying to sort out how I feel about Madonna and I finally put my finger on the adjective I've been grasping for: underwhelming. Her new album is underwhelming...pretty much everything since "You Can Dance" has felt empty to me...well, that's not fair. Let's sum up her discography.

To be fair, Madonna has always been mediocre. Her music is background for folding clothes or...dancing? I don't even dance to Madonna, so what is she good for? Ray of Light was the last album Madonna had any emotion or anything semi-new to say. She feels so generic. She thinks she's subversive and shocking even still. She thinks she's still the same brassy blonde she was 30 years ago. It's painful to watch. I would be willing to let Madonna be sexy at 54 if her face was still her own, but I am not buying into her image anymore. I hope Lady GaGa doesn't evolve in the same patterns as Madonna forever, because her trajectory is boring. I hate when artists fuck it all up at the end (Tori Amos, I'm talking to YOU) to the point of retroactively embarrassing themselves when they were still relevant. "Live to Tell" and "Oh Father" MEANT something to me as an 11-year old girl, but I can't look at her the same knowing she's been barely phoning it in for the last 14 years.

And don't even get me started on her lyrics. They're the worst! I was going to spend time looking up a bunch and making a little quiz, but I can't even be bothered with spending that much time on her lyrics as I'm about 80% sure the twenty minutes it would take to compose said quiz would be more time spent than the composition of the lyrics themselves...

She's infected me to the point than I am now phoning in this blog entry the way she does her career. I have as much expression on my face as the Botox robot she looks these days. I'm surprised I can even fling insults with all this apathy. Perhaps there's a bit of animosity toward this character that meant something to me in my preteen years.

It seems we're dealing with yet another career trajectory we need to cut off before the gangrenous part...I'm calling that time period 1998. What do you think, dear readers?
Posted by Mixtress Rae at 12:44 AM