Fiona Apple, please allow me to express how ardently I admire and love you. 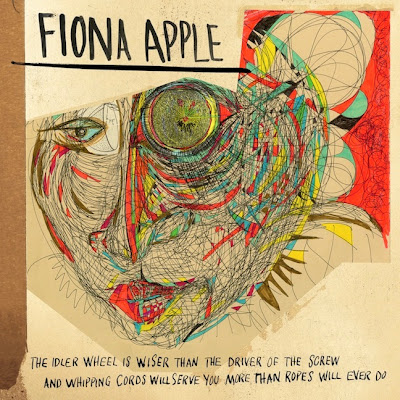 In my life I have taken many opportunities to express my obsession with Fiona Apple, but here in the Current, Etc I have not yet sung her praises loud enough.  I feel like I grew up with Apple, though she is 4 years older than me.  Her lush debut “Tidal” saw me through my first makeout sessions and first hate-breakups, then more than a decade later saw me walking down the aisle.  She is a rare artist in that she actually waits until she has exceptional material before she releases music, feels no urgency and makes an album simply when it’s time to make an album.  I have always admired her raw sensibility, the way she says what she’s thinking the moment she’s thinking it without any guard stronger than the shield of her inability to communicate with most normal people.  I assure you, I count this as an extreme virtue.  Blunt honesty is undervalued, especially in the world of celebrity.  I knew she was one of my people the moment she made that infamous speech at the MTV Music Awards back in the late ‘90s.  People tend to call Apple angsty, but really she is simply real, having turmoil and depression just like the rest of us.  She is the embodiment of awkward and admits her inadequacies with reckless abandon and it is brilliant and beautiful and grotesque all within the space of one ragged breath.


Fiona Apple is one of the only artists whom I will trust enough to purchase her album the day it comes out without hearing any of it first, as I did with “The Idler Wheel is Wiser Than the Driver of the Screw and Whipping Cords Will Serve You More Than Ropes Will Ever Do” when it arrived Tuesday.  She only writes one album per seven-ish years, but it’s always worth the wait, and this endeavor is no exception to the Apple barometer of excellence.

Speaking about who Fiona is is directly speaking about how her music sounds.  She is as genuine in her sound as she is in her actions.  Her words are raw and her music is unsettling when she feels unsettled, and she does here, most definitely.  Her musical timing is discordant and doesn’t hit on the beats you think they will.  For this reason, I had a headache the first time I listened to “Idler Wheel...”, but the thing with this album is that it is imperative that you listen to it without any other distractions.  Let Fiona Fiona all over you, with headphones on.  You probably won’t like it at first, but give it a second and third try and you’ll begin to feel more than you have in years.  You’ll begin to say things like “The bare eccentric percussion that serves as an accompaniment to her witty and perfectly-placed piano melodies do nothing but accentuate her developed, rich, and emotionally articulate vocals”, such as another raw and beautiful singer named Jonathan said to me today.  If you’ve ever felt a kinship with Fiona Apple, buy this record now.

Best Song (so far, as I’m sure this will change daily over the next year, then weekly the year after that, then yearly the decades after that, as this is how “Tidal” still effects me 16 years after its’ release): "Valentine"
Best Lyrics: “Just tolerate my little fist tugging on your forest chest.”
Posted by Mixtress Rae at 2:21 PM