Buffy the Vampire Slayer: Something Blue. 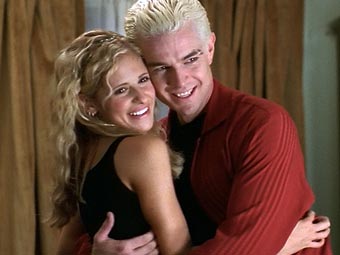 Willow is "hanging on by a thread", still mourning the loss of Oz.  He sent for his stuff and it is now pretty clear he isn't coming back.  Spike is still staying with Giles.  Buffy goes on her first date with Riley.

Of course Willow wants all the pain to go "poof" so she does a spell to have her "will be done".  Willow has a fight with Giles because he disapproves of her doing a spell in her "unfocused condition".  She tells him he can't "see anything" so he starts going blind.  Willow says something about Amy being a normal girl and she turns from rat to person for a moment.  So Will's will is being done, though only her sarcastic unintentional will.  When Will says "why don't they just get married?" referring to Buffy and Spike, they get engaged.  Willow calls Xander a "demon magnet" and then demons come from all over and invade Xander's basement.

D'Hoffryn comes to try to lure Willow into the vengeance fold.  Her rage is righteous, apparently, and he wants to recruit Willow.  Sometimes it's difficult to blog about Buffy episodes.  The metaphors are great because of their simplicity, but there's not a lot to say.  There's some character foreshadowing with Willow because you see her become indignant with Giles about doing spells when she really shouldn't and her trying to make her pain, which is enormous and extremely dire, go away with a poof.  This is the way she's always coped, and Buffy writers are very good at being consistent with the character arcs of everyone, for the most part.
Posted by Mixtress Rae at 7:35 PM