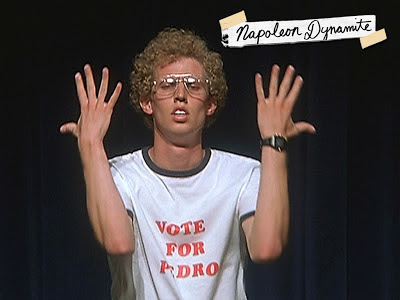 I think you know within the first 5 seconds whether or not this movie is for you. The opening credits are phenomenal. They really manage to get you geared up for the elementary-school-in-the-'80s-miasma of the movie. Somehow the infinite coolness of Jack White can't even undercut the current of nerd-setting you're about to be immersed within for the next 90 minutes. I'm always reluctant to start one of my favorite movies, like the time between viewings somehow negates my positive feelings for the film, even though it never works out like I fear it will. Already, I'm seriously on board and worrying that my tornado-damaged (it looks REALLY gnarly and this is the first time I've attempted to watch it since that awful day) copy of "Napoleon Dynamite" won't make it the full running time and I'll have to drive to Family Video to rent it or *gasp* spend the $9.99 on Amazon to purchase the digital version. I really don't want to do that when I know it will be $5 at Vintage Stock tomorrow, but I probably won't be able to resist the siren-call of the dance scene at the end for another 16 hours, so everyone hold your breath and hope that my spit-and-rubbing-on-pants-disc-cleaning trick worked like it's supposed to...

What's so brilliant about this movie is the space built into it. The (is it Idaho?) landscape is lush but realistic, the sound design is sparse but feels like the zen of youth, and who films the inside of buses anymore? since "Ferris Bueller's Day Off" anyway? Fucking fantastic!

"What are you going to do today, Napoleon?"
"Whatever I feel like I want to do....gawd!"

I used to begin mixes with this sound bite. Now I think it's my notification sound when I have a calendar alert on my phone...gives me that little moment of rebellion before I decide to do what the iPhone tells me to do.

I love that Napoleon is all clandestine about throwing the action figure out the bus window, as if anyone would care that he's doing something so ridiculous. Tetherball is stupid, everyone knows that. Awkward humor is pretty much the only humor I get and regularly enjoy. This movie was made for me. So priceless that he puts his tater tots in the pocket of his pants.

Once, in high school, I was really nervous to go out with a cute boy. He asked me to watch a Pokemon movie with him at the cheap theatre and we were both super awkward and decided to meet there. When we got there we found that the movie wasn't showing anymore and instead of deciding to watch something else or do something else, we both just got in our cars and left without hanging out at all. So weird. That's what the moment where Napoleon slams his locker-door shut and runs away after giving Deb her craft-stuff back reminds me of...so funny and so sad.

I also relate to the fact that Napoleon always takes the phone into the other room even though he's having the most mundane conversation ever. I do that too. I feel like I can't talk on the phone if I can't go into a separate room and shut the door.

Napoleon looks pretty hot in his suit. I'd totally clumsily slow-dance with him. I know the kids in this movie are obviously teenagers, but the ambience reminds me of my elementary school, probably because the era the movie seems to be set would be about the time I was in 5th grade; plus this was THE most unpopular time of my life. I'm really having a flashback here, apparently. I might as well go with it: so, in the last entry about "Moulin Rouge" I described my penchant for opera-singing-show-and-tell. I also farted frequently in class, asked out, and subsequently got turned down by, four different boys (in the having-a-friend-do-it-for-me or via "Do you like me, Yes or No" note way, of course), and sucked at all sports forever--even tetherball. I had two or three friends, at most, and girls were mean to me of course, but hey, such is life. If you don't go through stupid humiliation and embarrassment in school, when will you create the character to become cool later in life?

I'm going to have to start drinking things like Napoleon drinks his Gatorade. He does it like he's a super-athlete, like a dance warrior. Love it.

Napoleon dancing for Pedro's "skit" is one of my favorite moments in a movie ever. EVER. I get all giddy when I see it...it's coming up!! I think the important thing to remember in life, the thing maybe this movie didn't mean to convey, but does for me, is that it's better to do what you love awkwardly than to fit in quietly. Be a Napoleon and not a Summer. Still an awesome movie.