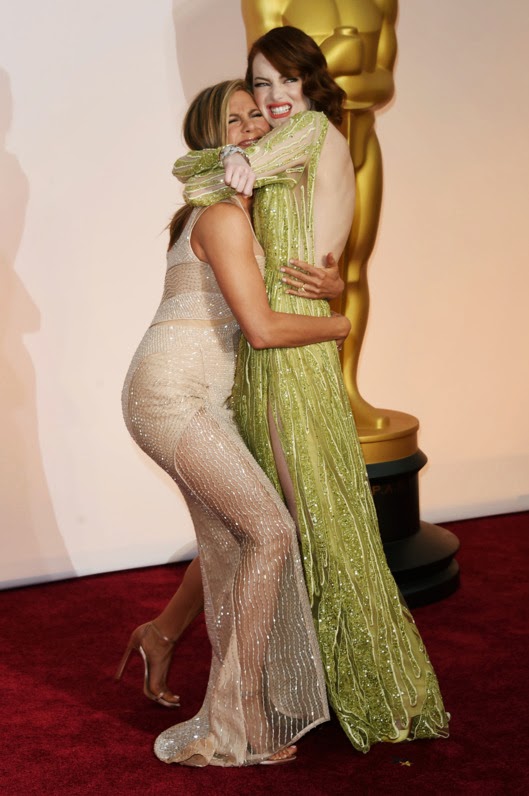 I just watched the Oscars, y'all. I have thoughts.

NPH did ok as host. Does anyone ever really do great at hosting these things? They always look so goddamned stressed. Emma Stone looked amazing and did you know she's in "Birdman"?! I guess I begrudgingly have to watch that now? Cate Blanchett also looked radiant as hell. That woman is a class ACT. Jared Leto was missing something from his '70s look: a ruffled shirt! What a missed opportunity!

There were a couple of moving music performances: one highlighted how slow our progress has been in the civil rights movement (John Legend and Common) and the other was Lady GaGa singing a medley from "The Sound of Music". Should I see that movie too?

Graham Moore, writer of "The Imitation Game", wins Mixtress Rae's Oscars for most inspiring speech by encouraging weirdos to "stay weird". That was really super sweet and I can't wait to reblog endless gifs of that moment on Tumblr later tonight.

John Travolta presented an award with Idina Menzel and he touched her a lot and it creeped me out. John Travolta always creeps me out.

Everyone called Wes Anderson a genius, but I stopped watching "The Grand Budapest Hotel" after an hour in favor of a bath because it doesn't pass the Bechdel test and the main character compared women to meat (wow, how much more cliche can you get?). I want to like Wes Anderson because I like the dry deliveries of his actors and the set design in his movies, and because he looks like Beck, but the parade of white men in his movies is tired. Seriously Wes, if you have room for 27 white dudes in every movie, you can squeeze in a couple of dozen other races and genders, don't you think?

Now for the best picture nominees and my limited and oversimplified understanding of what each film is about:

WHIPLASH: an abusive conductor and his relationship with a student
AMERICAN SNIPER: something about how hard war is and PTSD and stuff
BIRDMAN: a film about how Michael Keaton thinks he'll never move past playing Batman
THE GRAND BUDAPEST HOTEL: a Wes Anderson movie set in a hotel
THE IMITATION GAME: a movie about a very accomplished man that wasn't recognized for his genius because he was gay
SELMA: movie about civil rights in the '60s and Martin Luther King, Jr
THE THEORY OF EVERYTHING: a movie about Stephen Hawking
BOYHOOD: a movie filmed over the course of 12 years about a boy growing up

First of all, EVERY SINGLE ONE of these movies is about men. Men men men. At least four of these movies are about men that aren't straight (The Imitation Game) and white (Selma) and of able body (The Theory of Everything) and mind (American Sniper).

But guess which movie won fucking best picture?!?! The one about a straight white cisgender beautiful actor (Michael Keaton) whining about no one knowing him as anything but Batman. REALLY?!! Really? really?

The overwhelming struggle of how hard it has been for Michael Keaton to move beyond his role as a superhero in the hearts and minds of America. What a struggle.

Overall, I see that we are in a revolution for civil rights, gay rights, and feminism. Things are changing and the voice of weirdos (perceived and real) is getting louder. The white man is going to kick and scream on the way to being taken down to the level of everyone else. It's going to get really really ugly. But another victory for a type of person (white, male, cisgender, straight, actor, etc) that doesn't need any more victories right now is still a disappointment.

Unfortunately, the worst part is that I wasn't surprised.
Posted by Mixtress Rae at 12:15 AM