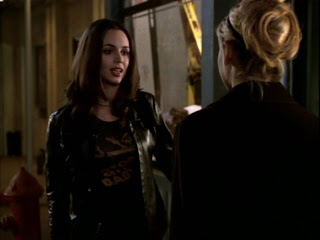 In the Buffyverse, rule #1 is that every action has consequences, and Faith fucking KILLED somebody. So, there will be consequences...

Opening sequence is Buffy dreaming of Faith drowning her. She is wearing innocent flannel sheep pajamas, of course. Joyce is watching the news; of course they've found the body of the deputy Faith killed.

Faith has infinite wisdom, as per usual: "It doesn't matter what kind of vibe you get off a person 'cause 9 times out of 10, the face they're showin' you ain't the real one." Buffy wants to tell and Faith is wanting to let it blow over. She tells Buffy that they've saved thousands and she "missed the mark" with that guy and she's sorry, but they're in the plus column. Buffy says that doesn't make them better than anyone else and Faith says "We ARE better." I kinda agree with Faith on this one. I would trust telling Giles, but you have to reconcile the good with the bad. It sucks that it happened, but seriously, when you're built to be a killing machine, how can you not ever harm a human amongst all the baddies? How many accidental deaths have happened at the hands of well-meaning police officers? I'm sure it haunted them forever, but it's part of the territory. You can't be perfect. You can't unendingly do good. There's no use beating yourself up about this if you're a Slayer. Buffy will always have trouble confronting how she feels about her duty as a Slayer. She DOES think she's better. If she could admit that, she might be able to use it to her advantage. Her insistence that they do everything HER way alienates Faith. There was some openness to her...she could have gotten in if she had given just a little.

Buffy tells Willow first. I like it when they emphasize their friendship; it doesn't happen often, but it's meaningful. Willow suggests she go to Giles, of course. She does, but Faith has already told him the story backwards. I'm callin' it: She has officially turned to the Dark Side. Buffy rushes to defend herself but as soon as Faith leaves Giles reveals that he could tell she was lying. Giles tells her its "not the first time something like this has happened" and she's shocked of course because she can't see anything beyond her dramatic and tiny little sphere. They agree on a meeting of everyone (everyone being Xander and Willow, I presume) to talk about how to help Faith deal with what has happened. Wesley overhears the whole conversation, so of course he's going to call the Council and be impetuous and fuck everything up for Faith even more. My heart really goes out to Faith. I hate to see her fall every time. It's devastating to watch someone so close to recovery from a life of emotional turmoil just be shoved in the opposite direction.

During the talk between the Gang they agree one-on-one is the best way to approach Faith and Xander suggests he do it because they've been close. He reveals that they slept together and Willow is visibly upset. She is later shown crying in the bathroom. The way they dealt with her later lesbianism ruins the gravity of moments like this. I've always thought it would be much more believable if they would have wrote her as being bisexual once she met Tara. It is clear that she at one time really loved both Xander and Oz. I don't understand the shift they made in her later...she never looked at another boy once she got with Tara. That's not how being a lesbian works. She could have had the exact same relationships she has season 4 and beyond without suddently BECOMING a lesbian. That's just a pet peeve of mine.

Xander goes to talk to Faith. He says insightful things, like Xander does. Faith kind of almost rapes Xander. Scary. Kind of almost strangles him. Good thing Angel has been lurking. He saves Xander then kidnaps Faith and chains her up in his house. Then you go, "AHA! Angel is the perfect person to talk to Faith!" He really is. He's on a path to redemption and knows what it feels like to kill. And JUST as he's starting to get through to her, Wesley and the Council show up. Grrr.

She escapes. After Faith bests Wesley, he is remorseful and finally lets them have the power instead of trying to exert his control. Buffy finds Faith.

Faith: You need me to tow the line because you're afraid you'll go over it, aren't you, B?

I love that line! She's right. The Mayor's people show up and Buffy and Faith fight them. Faith has a chance to escape while Buffy is in danger of being drained by Mr. Trick, but she saves her. Hopeful convo with Buffy and Giles afterwards, then

Faith shows up at the Mayor's office. She convinces him to give her a job. I forgot she went to him and not the other way around! Much as I hate to watch her fall, Faith's relationship with the Mayor is really fun to watch.
Posted by Mixtress Rae at 6:25 PM