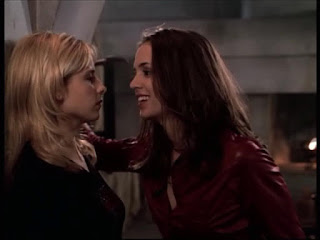 Scene 1 shows a breathless Buffy and Angel emerging from a movie theatre. They have obviously just seen a really sexy movie which resurfaces their issue of not being able to do it, ever. She apologizes for getting him "worked up" and he is all upstanding and sweet. I retroactively like Angel. I didn't the first few times around, but I like more masculine men the older I get. He is a little whiny, but it's not like he's Ross-whiney.

Faith and Buffy see a demon in the cemetery that offers them the Books of Ascension for cash. Buffy has never heard of them and Faith has of course, since she's now working for the Mayor. The Mayor suggests Faith go get the books and kill the demon after offering her a glass of milk and encouraging her to fortify herself with calcium.

Cordelia is still only showing up to hit on Wesley. Faith kills the demon. She gets a lot of blood on her hands and it obviously bothers her for a second...yet another nail in her coffin. She goes to Angel for "help". She lays it on thick and even attempts to seduce him, but he's virtuous, of course. After the rejection, she runs off, but not before Buffy sees Faith at Angel's kissing him on the cheek. Afterwards, we find out the Mayor put her up to it...he wanted her to seduce him to get him to lose his soul. Since that tactic didn't work, they decide to take a new route...which has something to do with a creepy blue Mortal Kombat-lookin' dude.

Buffy expresses her jealousy of Faith to Willow and Willow reassures her that Angel only has eyes for her. She then uses a phrase I repeat often: "I too know the love of a taciturn man..." I LOVE that line! Willow commands that Buffy go talk to Angel.

Faith and the Mortal Kombat lookin' dude do a spell and Angel immediately starts making out with Faith in Vamp face and then punches her and kicks her, seemingly soulless again. Gross. I don't enjoy Angel as Angelus, even though I respect David Boreanaz for his acting abilities. He meets the Mayor and finds out that he's impervious to harm (for the 100 days before the Ascension, apparently). Angelus knocks out Xander as they pass him on the street saying "that guy just bugs me". they meet up with Buffy at her house and Buffy is still looking all vulnerable. He reveals his vamp face and Faith simultaneously reveals her alliance with Angelus. Xander tells the gang that Angelus is back. Xander is relishing this fact, of course. Angelus has Buffy chained up while Faith reveals a lot of info about herself and the Mayor's Ascension.

Sarah Michelle Gellar is so hot. I don't think she's had any plastic surgery, either. And she's a normal weight these days. And she demands she have the weekends off to spend with her family from the set of her new TV show. She seems like a down-to-earth person. I'm so glad the chick that played one of the most important characters EVER, in my opinion, seems to have kept her head through fame. That's so cool.

After Faith reveals info about the Mayor, she says something about being the "World's Best Actor" and then Angel says "second best". Oh! Angel and Buffy were playing her all along. He's not really Angelus and Buffy was in on it. Everything is out in the open. When the gang shows up Buffy and Faith are fighting. Mortal Kombat guy was working with Giles all along as well. No one told Wesley, of course.

Buffy is visibly upset seeing Angel act like he liked Faith. This is a good touch to show real world ramifications of what they did, even though it's nauseating to see Buffy all hurt over Angel. I like her better when she's heartless. She goes to Angel and tells him she needs a bit of a break from him. That's one of the things I love about Joss. Even though there's vampires and shit, he's realistic about emotions.
Posted by Mixtress Rae at 10:21 PM