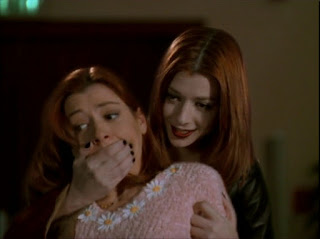 Opens with Anya pleading with her Vengeance Boss to give her another chance. She hates being human. He says no.

Snyder forces Willow to tutor an asshole football, or maybe basketball--something sports-related, dude. He's awful to her and makes her do all the work. There's a definite theme of Willow being taken advantage of and being perceived as "reliable" and "boring" and a meek little girly-girl. Anya goes to Willow for spell help and Willow is totally into it because it's about a spell and not academia. Anya is trying to get her amulet back so she can be a proper Vengeance Demon again but she tells Willow it's a lost family heirloom. The spell gives Willow visions of the alternate universe shown in "The Wish".

Unknown to both Anya and Willow, Vamp Willow was summoned back during the spell instead of the necklace. She's confused being in this world not taken over by vampires. Percy (jock asshole dude) sees Vamp Willow at the Bronze (of course he thinks she's Real Willow) and they have a confrontation. The first utterance of "Bored now."!!! Buffy and Xander see her and she does Vamp face so they freak out and think Willow's a vampire now.

There's a sweet moment where Giles, Buffy, and Xander talk about how she was the "finest of all of us" all bewildered on the stairs of the library. Then Willow comes in...Real Willow. They all hug her. It's cute.

Vamp Willow seeks out Real Willow to convince her to help her get back to her own world. Real Willow shoots Vamp Willow with a trainquilizer dart and dresses up like her to infiltrate the shenanigans Vamp Willow started at the Bronze. There's a little conversation where Real Willow postulates that Vamp Willow is a little gay and Buffy "reminds" her that vampires are nothing like who they were as humans and Angel says, "Well, actually..." but Buffy shoots him a look, so he stops talking. I take back a LITTLE of what I said in an earlier blog about how they had no foreshadowing into Willow's gayness. They did, although I'm still upset at how they handled it overall.

Vamp Willow is now in Real Willow's clothes and chases Cordelia after an entertaining scene wherein Cordelia lectures Vamp Willow on the "Ethics of Boyfriend Stealing" before letting her out of the "book cage" again not knowing she isn't Real Willow.

This is a really sweet, funny episode. Willow used to be so endearing in the early days. She is just starting to find herself beyond smart, studious, shy girl with the spells and stuff, but she isn't yet mean or self-sabotaging.

Real Willow won't let Buffy kill Vamp Willow, so they send her back to her world. The SECOND she arrives, Oz stakes her.

The end scene is Percy groveling at Willow's feet giving her an apple and submitting homework to her that he did as he is now scared of her. Cool.
Posted by Mixtress Rae at 8:54 PM