Buffy the Vampire Slayer: The Zeppo 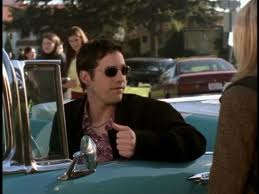 This is the Xander-centric episode told mostly from his POV. He has his own little plucky soundtrack and the whole vibe is whimsical and much less dramatic than most episodes. Does this mean we take Xander less seriously? Perhaps. Let's dive in, shall we?

We begin with fog and Giles, Buffy, Faith, and Willow fighting a scary lady demon. They kill her. Willow is fighting with spells (turns out the fog was hers), Giles is fighting with knowledge, and Buffy and Faith are the brawn, of course. Xander is an afterthought. You don't even find out he's there, offscreen passed out, until the foe is vanquished and they've been assessing for a few lines of dialogue...

Buffy then encourages Xander to be "Fray Adjacent" from now on, stay out of danger etc. Giles concurs. So, the premise is set that Xander doesn't feel like a man and has some insecurities surrounding his place in the pack, etc.

Scene two shows Xander attempting to join in on a game of catch with some football jocks. He misses the ball when someone finally throws to him and it hits a slimy-looking bully kid who then threatens Xander. Cordelia oversees/hears and torments Xander and his lack of manliness/cool, calls him the zeppo.

Urbandictionary.com defines zeppo as; One person in a group or gang that is either used, ignored, and/or stepped on quite frequently.

At lunch, Xander ponders the essence of cool aloud to Oz. Xander decides he needs a thing.

Cut to Giles and Buffy...there's an Apocalypse comin'. The Hellmouth is going to open up and Oz's werewolf self is howling. Everyone is in research-mode but they barely mention it to Xander. Xander shows up in a beautiful turquoise convertible. A girl is interested in Xander because of his car and Cordelia oversees/hears. Turns out the girl is obsessed with cars and pretty boring. Xander sees Angel and offers to help, but Angel tells him "to stay out of harm's way".

Xander hits a car. Bully-dude shows up and threatens Xander with a knife. A cop shows up and Xander covers for bully-dude. Bully-dude decides Xander will be his wheel-man. He has Xander take him to "get the boys", which turns out are in the cemetery, 'cause they're dead. Zombie-dudes.

Cut to dramatic chanting in Latin or Aramaic or whatever from Giles...whoever he just summoned won't help him. Xander shows up along with his whimsical theme music and offers his help, again he is denied. Giles doesn't notice Xander is hanging out with zombies.

The Zombie Dudes make Xander take them to break into a hardware store for supplies to "bake a cake". Xander runs into Willow and she hugs him and tells him she loves him all dramatically. Xander escapes the Zombie Dudes and finds Faith fighting another lady demon. They escape to her room without her getting to kill the demon. She seduces Xander...thus he loses his virginity. Xander with his shirt off! Faith promptly kicks Xander out afterwards.

Oz-as-werewolf is pretty wound up 'cause of the Apocalypse and all, so Willow has to shoot him with a tranquilizer gun twice.

Xander realizes the "cake" the Zombie Dudes were making is actually a bomb. Xander decides he's out of his league and goes to find Buffy. Cut to Buffy and Angel in their normal yelling at each other drama...Xander shows up to ask for help, but seeing them yelling at each other decides to handle it on his own. The gang is doing heavy spell action in the library over the Hellmouth while Zombie Dudes are in the broiler room below setting up the bomb...meanwhile, Xander decides to find Giles for help, but at the last minute sees Zombie Dudes and drags one of them alongside his car getting information from him about where the bomb is.

The music in this episode really MAKES the episode. Xander's theme is whimsical fiddle, which plays when you're seeing his POV, whereas the rest of the time it's all drama Apocalypse orchestra...the transitions to and from Xander's theme to the serious movie theme that we'd be used to in an End-of-the-World episode is brilliant. Seeing it from Xander's perspective takes the pressure off a bit from the usual histrionics of the world through Buffy's eyes. It really makes the Buffy-world seem overly ridiculous.

Everyone is in the school now while Xander is trying to dismantle the bomb unbeknownst to the rest of the gang fighting the scary monsters coming out of the Hellmouth in the library. No one knows that the whole school might be blowed up by some mean Zombies and that Xander is on it! It comes down to a staring contest of will between Zombie Bully Dude Leader and Xander as the seconds tick by on the bomb. Xander wins out and Bully Dude dismantles the bomb, thus Xander saves the freaking world AND proves his manliness to Bully Dude, then Oz eats him...Bully Dude, not Xander (but Xander doesn't see this).

Xander's self worth is restored, and he tells no one what he did. So classy. Cordelia attempts to taunt Xander again and he just smiles and walks on by, not validating her at all. Yeah! Take that, bullies of the world!

Moral: Self worth comes from within. You don't need anyone else to validate you. I like it.