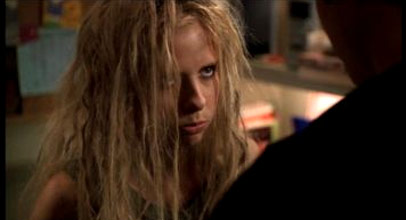 This is one of my favorite episodes because I really enjoy drunk Buffy.

She is still hung up on Parker and is having fantasies that she's saving him and he's overcome with gratitude, etc. She is in psychology class and Professor Walsh has a voiceover talking about the id and how it wants food, sex, shelter, all the time.

Xander got a job as a bartender on campus so he can be involved in their lives, but not marauded as a lowly "townie" anymore. It's not believable that Buffy is so hung up on Parker...have I said that before? First inkling of Riley liking Buffy. I wonder if the asshole philosopher frat boy was the basis for Logan on Gilmore Girls. He has the same vibe. The frat boys offer Buffy and drink and are very charming. I would have drank with them, 'cause they have big vocabularies.

First sighting of THC and Veruca. It's too bad they only had one album. When I first saw this episode I became obsessed with the music and it was really hard to find the album, but I finally got it from one of the band members. It was just a burned CD. They could have been a great trip hop band.

So, Buffy starts acting weird. She steals a girl's sandwich in class and is speaking in short, dull sentences. She is drinking at the bar a second night and her and the boys are acting like neanderthals.

Oz had a reaction to Veruca and now things are all weird between him and Willow. It's not just drunkenness that Buffy is experiencing, she's regressing into Cavewoman status. Willow confronts Parker. Kumar is one of the neanderthal fratboys. One of them actual gets all cro-mag forehead and then they all start changing. Buffy doesn't fully transform, presumably because Xander cut her off from the beer and sent her home. Xander explains the situation to his boss when he sees the boys transform and his boss says "They had it comin'." He's been using magic or chemistry or something to poison the beer. Xander has some sort of UFO scene on his shirt...that's hot.

Xander gets Giles, of course, and Buffy has dredlocks and is using her lipstick to draw on the wall. "Parker bad." The Caveboys accidentally set fire to a dorm (or library? something on campus). Buffy still saves the day, even in her primitive state. She even saves Parker, just like in her fantasy, after she hits him over the head with a stick and knocks him out. Closure.

Afterwards, Parker thanks Buffy just like he did in the fantasy. She knocks him out again. Yes!