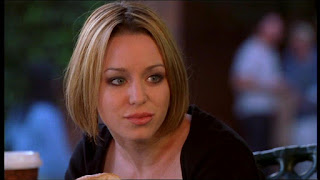 Episode 62 of Buffy the Vampire Slayer.

The episode starts with a good old-fashioned slayer vs. vampire fight. Her confidence is definitely back. Spike is lurking in the shadows making idle threats when he gets tazed and captured by an unseen captor(s). Giles shows up at the Bronze and everyone is sufficiently perplexed. Veruca's second and last appearance. Oz is definitely into her. Veruca is sexy. Seth Green looks like the sweetest spooner.

It's the full moon and Oz gets out of his cage and wakes up in the forest naked with Veruca-oh, she's a werewolf too, by the way. Uh-oh. He acts like he doesn't know what happened, but you can tell he totally does. Veruca starts challenging his philosophies about the wolf within him. He's having a bit of an identity crisis, of course. Willow tries to seduce him, but he brushes her off. He's an introvert and he needs time to process. Willow goes to confide in Xander. Xander is so insightful and wise. Oz calls Veruca to his cage and lures her in. Willow finds them in there together in the morning. Interesting that with Willow Oz is the back spoon, but with Veruca he's the front. God, I hate it when Willow cries. Sometimes it gets to me and sometimes her whininess just bothers me. This time it's bothering me.

Willow is so darkly despondent that she almost walks out into traffic, but luckily Riley saves her. Willow starts consulting her magic books to ease her pain...typical copout Willow can't contain her pain. Veruca tries to kill Willow just as she's decided to stop her spell. Buffy runs into another masked Army-lookin' dude. Oz comes to save Willow as he's starting to change for the third night of the full moon and he kills Veruca, even in his wolf state. Buffy has to step in and sedate him.

Buffy talks to Giles about the Army guys. Willow goes to see Oz. He's packing. His exit is heartbreaking, but it completely makes sense. He has to go find himself. Goodbye, Seth Green. We will miss you.

Commentary (by Joss Whedon, Seth Green, and Marti Noxon) notes added 5.17.13: They're being all jovial and giggly, but it's endearing to me this time because it's Joss, Seth, and Marti together. I like them a lot.

Joss is saying something about (in response to Seth saying everyone on this show has nuance and the bad guys are always depth-y instead of just pure evil) how no matter how diabolical you are, you'll still think you're righteous and doing the "right" thing.