The Day the Music Died. 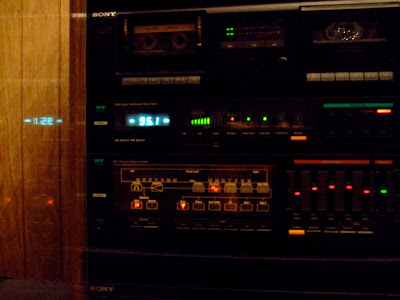 Ok, so music is not at all dead to me, but I've decided to spend 24 hours without it (my Day of Emptiness will terminate when I wake up tomorrow morning, though this will technically make 34ish hours in total without beautiful, beautiful music).  As a verified music-junkie, this was difficult, but I had a few things that got me by: crutches, as it were.  I listened to podcasts as a substitute and I worked all day, so I didn't have much time to think about how silent my day was.

I also had the distraction of a blog to create, the one you're reading right now (again, created withOUT music).  This is an adaptation of my zine called Chickweed.  Unfortunately, chickweed.blogspot.com was already taken.  I could have accepted this if someone cool had the domain, but it's an unused blog!  I'm outraged that I couldn't have the web address I wanted because someone is stagnant in that space!  Whatever, so the explanation for chickweedish.blogspot.com is that normally my zine would have an ish followed by a number, i.e. Chickweed: ISH5 or what-have-you.  Now, the blog IS the ish!  Get it?  Anyway, here it is.  Those who know my zine know what to expect.  My plan is to have multiple contributors (email me if you want to contribute: mixtressrae@yahoo.com) and to post my articles I publish in the Current a day after the Current comes out (every other Friday, generally) in addition to regular articles/blog posts that are mostly music-related.

For those new to the Chickweed World, Chickweed is a zine I created a couple of years ago to write mostly about my music-obsessiveness.  I have decided to see where the blog version of Chickweed takes me, as production costs of the zine are considerably more than the FREE that this blog will be.

Now, back to my terrifying day without music...it really wasn't that bad until now.  The present moment is the hardest time for me, because normally when I'm sitting at my computer blogging, archiving, encoding, I am listening to Pandora, Spotify, di.fm, or somafm.  Instead, I am forced to attempt to blog whilst my husband watches 30 Rock, which is so not doing it for me anymore, the show, not blogging during TV, which was never doing it for me.

So that's my underwhelming inaugural post.  There will be more in the near future, because I have two from contributors ready to post, I just don't feel like formatting them tonight...I'll let this lame intro tide you over for the time being.
Posted by Mixtress Rae at 11:34 PM