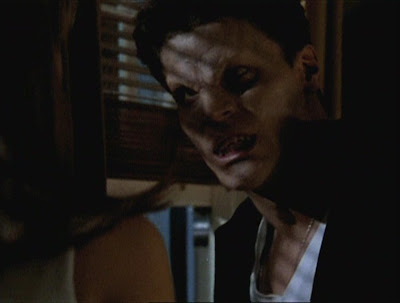 This one is probably going to be epic. This may be the one where Buffy finds out Angel is a vampire.

There's the Anointed One, that kid who looks like a baby John Cusack.

Why does no one ever comment on how creepy Angel is lurking in the shadows all the time? Super creepy. I'd never go out with a guy who lurks in the shadows spying on me, no matter how good his intentions are. Gawd, he's SUCH a tortured soul. Broody broody. I'd much rather go out with Xander, but that's just me. Buffy is way too dark for Xander, though.

Yeah, he REALLY just said that. How did Buffy make it as a Slayer so long without knowing vampires can't come in unless invited?

Angel and Buffy's first kiss: yep, she's finding out in about three seconds...and she screams.

Now Buffy is wearing a tank top with a snowman on it. WTF? Xander looks nice in his usual polyester button-up...this one a nice olive green that looks good with his, everything. Xander's jealousy of other boys is annoying, though.

Joyce is so pretty. Omg, Darla bit Joyce! I don't remember that! Oh, and Buffy walks in after with Angel all in vamp-face. And Buffy throws Angel through a window! Giles and Joyce meet for the first time here when Joyce is in the hospital.

I keep looking the actors up to see their ages. In case you're interested, David Boreanaz (Angel) is 28 during the first season and Anthony Stewart Head (Giles) is 44. David Boreanaz looks older than 28. He looks better now on Bones, I think. Maybe because he's not as serious as Booth as when he played Angel.

Wow, I didn't remember Darla dying so early in the series!
Posted by Mixtress Rae at 6:49 PM