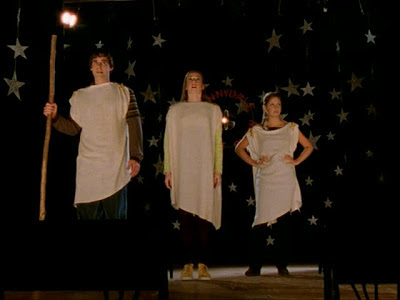 Introduction of principal Snyder, forcing Buffy, Xander, Giles, and Willow to participate. bwa ha haaaa! I hate ventriloquism, though. Creeps me out. Just imagining these guys sitting at home practicing...talking to the doll, the doll talking back. It's all very serial-killery to me.

This is another episode I normally skip. If I had started watching Buffy back in season one, I might not have been as intrigued, though it is still very high-quality programming. It's just not emotionally-wrenching quite yet. But that's ok, because there shouldn't be dramatic turmoil in a sophomore's life. Really soon, things won't be all cute and calm anymore, so I should just enjoy the lightheartedness at the beginning.

I wish I had a leopard minidress! If only Buffy had stayed this weight. Her thighs are thick in such a hot way at this point.

I think they actually hired an actor that is phenomenal at ventriloquism! That's impressive, even though it freaks me out.

Buffy wears a lot of white tank tops and white babydoll tees with images on them. I wonder if they put her in white because she's a symbol of goodness and morality and all that. That would make sense, but it's pretty typical symbolism. I swear this is not the same costume designer as in later seasons, unless whoever it is gets MUCH better later on. Buffy pretty regularly is either wearing white and cuddly outfits or dark and vampy outfits, which DOES make sense. And to prove my point, she is now in all black right after the white tank outfit...and right before THAT outfit was the leopard minidress with black go-go boots. I wonder how consistent this formula is. They probably phase out the lighter, cuddlier outfits as time goes on...as Buffy herself gets darker and more tortured. Right now she hasn't reconciled her Slayer self with her Cutesy Blond self. It's odd to see her in white and pink with bows.

What is the real-life metaphor for this episode? The dummy wants to be human and is an entity trapped in an inanimate object...but what real-life parallel is there? Besides ventriloquists being creepy and probably, just to be on the safe side, you shouldn't trust them.

Oh, wait, the dummy isn't evil? I'm confused. The demon is one of the kids in the talent show? Nope. Ok, maybe he is evil. Xander saves the day by keeping Giles from getting his skull sliced open by a guillotine and some teen demon guy. ANd now there's another demon guy. Wtf is going on with this episode? Ok, the puppet is not evil?